Thanks to expert storytelling and deep characters, Tangled is yet another touching and enchanting addition to the rich collection of Disney favorites.
Todd Hertz|November 24, 2010
Our Rating

Walt Disney Pictures' 50th animated feature, Tangled, is a re-envisioning of the Brothers Grimm's classic story of Rapunzel. Umm, so why isn't it called that? And what's with the rough-and-tough guy who dominates many of the commercials? The answer to both questions: Marketing.

As the L.A. Times reported, Disney discovered a year ago with The Princess and the Frog that princess movies don't sell so well with boys—especially not ones with a girl in the title. So Disney changed the film's title and showcased the swashbuckling Aladdin-meets-Robin-Hood character who replaces the original story's prince in asking for Rapunzel to let down her hair.

Luckily, these marketing moves don't compromise Tangled's phenomenal storytelling or considerable charm. In fact, under its boy-sensitive marketing lies the classic Disney princess story—full of magic and dreams coming true. Still, the movie wisely takes a page from Pixar's playbook to fill the movie with so much well-done slapstick humor, action, goofy characters, and genuine fun that boys won't feel like the ads gave them the old bait-and-switch to trick them into a "girl" movie. After all, the boy-meets-girl love story is second to the story of a girl finding her real parents. (In fact, while this male viewer loved the audience-pleasing humor and action, it's entirely possible that he teared up way more than many girls will.)

Suffice it to say, Walt Disney Pictures has added yet another touching and enchanting favorite to its very rich animated collection.

The movie (which feels most like The Little Mermaid meets Snow White) begins in Beauty-and-the-Beast storytelling mode to set up the film's fable. Once upon a time, a drop of the sun caused a magical flower to grow in a faraway kingdom—a flower with the power to heal the ill and bring youth to the old. When the queen experiences trouble in childbirth, her subjects scour the land and find the magical flower, which saves the queen's life and leads to the healthy birth of her new daughter.

But not all is well. With the flower now gone, a wicked old woman named Gothel has lost her secret ticket to everlasting youth. Or did she? Gothel discovers that the baby princess now has the flower power in her sun-colored hair. Gothel kidnaps and hides the girl in a tower to be her own personal fountain of youth—all the while masquerading as her doting mother. That arrangement is threatened when a teenaged Rapunzel (voiced by Mandy Moore) starts asking questions about the outside world, and Flynn Ryder (Chuck's Zachary Levi) climbs into her tower looking for a place to hide from the royals he has robbed. 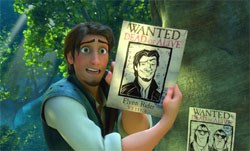 There's good thematic grist to explore. The filmmakers seem attracted to the idea of sharing gifts with the world versus keeping them to oneself. Gothel does the latter by deceptively telling Rapuzel, "A gift like yours has to be protected." But by protected, she means hoarded, and she does so through scare tactics like exaggerating the evils of the world and downplaying the young girl's ability to handle them. In fact, poor Rapunzel is so misinformed that she's shocked to discover that men don't have pointy fangs.

Gothel teaches Rapunzel that goodness must be protected and hidden, because evil is more powerful and, eventually, will overcome it. Emphasizing the movie's heavy imagery of dark versus light, Gothel says: "The world is dark and cruel. If it finds even the smallest ray of light, it destroys it." It's fodder for great discussion among Christian families.

Rapunzel faces other selfish manipulations too. Flynn sells her false messages to get what he wants: a priceless tiara. It all adds up to about 10 minutes of mixed messages and lies. (In fact, one song by Gothel is all about the evils out to get Rapunzel.) Will young viewers be confused by all the false messages about isolating oneself from the scary world and youth rebellion? Probably not. These are complex issues but executed and resolved in such ways that kids (especially if engaged to talk it through) should be able to discern the good from the bad—in terms of both characters and messages.

That might be what I like most about Tangled. Completely opposed to the impression I got from the commercials, this film is pretty complex and handles its complexity artfully—in its story, themes, and characters. In fact, a speechless horse is a more complex, multi-dimensional character than some movies' leads! And he is just one in a surprisingly large cast of small but excellent characters led by the fun, dynamic, and wondrous Rapunzel.

Disney has always done big spectacle and epic visuals well, and does the same here. But Tangled's complexity works because of its attention to detail and the smaller moments. The big moments might be splashier but it's the silent, tender moments between the heartsick king and queen that give the film some wonderful authentic glimpses of gentleness, sadness and joy.

Maximus has more character than some leading men

Some viewers might see overly feminist messages in Rapunzel's independence and free thinking. Others will have concerns about a bold, tough princess still needing a man to save the day. But in the end, Tangled is the story of a person who believes there is more out there than what's she been told—and seeks an answer to the gentle knocking on her heart. What she finds: Never-failing love from a source she didn't even know existed.

Tangled is rated PG for brief mild violence. There's a lot of hand-to-hand combat and slapstick violence—some including Rapunzel. Characters are put in perilous situations. One character is pushed from a window to her death (but no impact is seen or heard). Characters disrespect authority and seem to encourage rebellion against parents. Some characters give false, manipulative statements meant to deceive others—messages that might need to be "untangled" for smaller children.