An old priest and a hardened convict open each other to grace in this spare, gentle story.
N.W. Douglas|October 15, 2010
Our Rating

What does it take to bring healing and forgiveness into lives jaded from deep hurts and old habits? How can words revealed in their right time allow grace to pour into thirsty souls? And how can two very different people be catalysts for growth and freedom in each other's lives? Such are the major questions inspired by Klaus Härö's Letters to Father Jacob, a simple and sincere tale of unexpected redemption. The Finnish film (with English subtitles) opened in limited release last week, and comes to DVD in February 2011.

Leila (Kaarina Hazard), a convicted murderer, receives an early pardon from her life sentence. Taking the only opportunity available, she goes to work for Father Jacob (Heikki Nousiainen), a blind elderly priest who lives alone in a large rectory and tends an abandoned rural church. Instead of housework, he wants her to read letters to him. Jacob lives for his correspondence, passionately embracing his role as an intercessor for all who write with requests. Leila is hard-nosed about matters of faith and tempted by the shady opportunities of serving a frail, sightless man who doesn't much care for his tin of life savings.

It's a familiar template—a cold and surly individual is warmed by the presence of simple and innocent folk—but Härö avoids sentimentality. Father Jacob isn't a perfect little sunbeam overflowing with proverbs and good cheer; he's a tired and faithful man clinging to hope in the face of his own apparent irrelevance, his church having dried up long ago. As Jacob, Nousiainen is constantly in a dance between joy and sorrow, and he walks that tightrope without ever falling completely to one side, or into some sort of generic bittersweet caricature. Instead, what emerges is a delicate and carefully pitched performance that suggests the worries on Jacob's mind—secret burdens that he refuses to face. 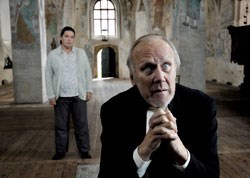 Hazard's stony performance as Leila follows a similar pattern; her grim, silent close-ups betray little emotion, but still express a sense of her inner anguish. When her barriers begin to fall, the sparseness of her earlier scenes pays off in a big way.

Cinematographer Tuomo Hutri paints each frame with natural light, giving indoor scenes an expressive mood that captures the inner struggles of both characters. The use of daylight to penetrate dark and musty rooms evokes the memory of Swedish master Ingmar Bergman, whose moody dramas and stark images arguably set the template for films focusing on spiritual and existential crises (and who personally recognized Härö's work in 2004 by awarding the Ingmar Bergman award to the young filmmaker, now 39). Father Jacob functions within this tradition of searching for meaning in moments of quiet—it's slow and contemplative, unraveling in an unhurried manner—but always with a firm and deliberate pacing that keeps the plot moving forward.

Those moments in between the driving actions are the key to immersing viewers into the quiet atmosphere of a blind man's life; a world that comes alive through a carefully crafted sound design: whistling kettles, thickly sliced bread, trickling tea, and the creak of an ancient home's floorboards. Outside, the patter of rain, and inside, melodies provided by a leaky roof. Each sound gets crisp, isolated treatment; each one is important, as it would be to Jacob. 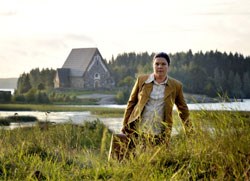 The attention to sound also emphasizes the importance of touch and the way Jacob and Leila are rooted to the physical world, using their tactility to express their interior selves by focusing on specific sounds such as their footsteps. Leila's presence in Jacob's home is established most strongly by her heavy, clomping steps echoing in quiet rooms, uncomfortable within and insensitive to her surroundings; later, Jacob's bare feet traipsing through the mud becomes a motif of sorts for revealing his faith as it throws off his preconceptions and embraces God on his own terms. The closer Jacob and Leila grow to God, the less they care about the messes they're walking through.

The film is rich in themes of forgiveness, of sharing burdens, and of letting go of ravenous guilt. What's most curious is its focus on intercessory prayer and the accompanying feelings of hope and doubt—especially centering on the question: does prayer actually do anything? Are these letters really all that Jacob has left? The film unfolds these questions slowly, revealing more about Jacob's letters as Leila goes deeper into his life, refusing to settle on one absolute answer.

If the film has a flaw, it is its brevity. The careful pacing, and heavy emphasis on letting the viewer sink into the setting, make it feel longer than 74 minutes, but even then the skeletal plot seems stretched (which makes sense, considering that the film was originally destined for television, not movie theaters). Another ten or fifteen minutes spent with Leila and Jacob, even just waiting and watching with them, might have made them more fully-dimensional people instead of just characters who gently but efficiently drive the plot forward. The compact nature of the script sometimes makes significant and even emotionally resonant events feel a little more mechanical than necessary, but the tenderness of such moments are recovered by the honesty of the performances. 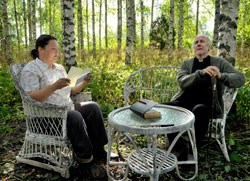 Härö, who describes himself as a Christian, says he "hoped to make a film that would portray faith in a warm and genuine manner. I wanted to tell about us, the average people, in need of mercy and forgiveness for our daily shortcomings, and about hope and respect for life that isn't always what we might have hoped for."

Mission accomplished. At its core, Letters to Father Jacob is a parable of grace—grace that is unstoppable, finding its way in through the cracks, whispering and guiding, and finally, smashing down walls of hurt and shame. Father Jacob is a humble reminder of just how unpredictable and unfathomable God can be in his plans, working seemingly meaningless situations for our own good. But even more powerfully, Jacob captures in the simplest terms the beauty of two people in communion with God and one other, learning to work out their salvation with fear, trembling, and the faintest of hopes.

Letters to Father Jacob is not rated by the MPAA. There are a few brief instances of mild profanity and taking God's name in vain. Though there's very little objectionable content, children under 12 or 14 would likely be bored by its themes, slow pace, and subtitles, but it's marvelous discuss fodder on themes of grace, forgiveness, and redemption for mature teens and adults.