Humble man of faith or arrogant jock? This documentary explores both sides of the late racing legend.
Russ Breimeier|August 12, 2011
Our Rating

Was the late Ayrton Senna—one of the greatest drivers in racing history—a humble man who loved God and, like Eric Liddell in Chariots of Fire, one who drew closer to the divine as he ran faster and faster? Or was he a cocky, almost reckless personality who spoke his mind and ticked off many of his competitors and race officials?

Senna is a documentary that shows both sides—and more—of a complicated man who was a three-time Formula One world champ, a national hero in his native Brazil, and a legend considered one of the greatest drivers in racing history. Directed by Asif Kapadia (2001's The Warrior), it's a winner for both F1 enthusiasts and newbies. Almost entirely comprised of archival footage from Senna's 1984-94 career, with voiceover comments from family, friends, and racing experts, the film captures the excitement and danger of the sport while also depicting Senna's rise to success—and his tragic end. Senna was killed in a crash while leading the 1994 San Marino Grand Prix.

He's depicted as a modest man who loved God and country, who saw racing as his way of drawing closer to God and following his will. The film shows him attributing God for his success and for calming him before races. Though a specific passage is never referenced, the film indicates that Scripture gave Senna the courage to participate in a race he was reluctant to run—the one that proved to be his last. And he demonstrated his faith by donating millions to his homeland to combat poverty.

The film is being marketed to faith-based audiences, but it doesn't go deep enough in exploring Senna's beliefs. Most of the scenes in which he references his faith involve his quest for perfection—for example, ... 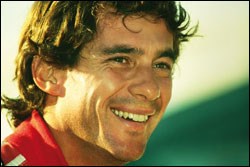