If you've seen one James Bond movie, you've more or less seen them all, right? Any variation in tone mostly depends on who's playing 007. So there's something refreshing in the way the Mission: Impossible movies keep the same lead actor, yet bear the unmistakable stamp of their directors.

The first film in 1996 featured Brian De Palma's unique flair for close-ups and long tracking shots—perfect for building the tension of an espionage thriller. John Woo's follow-up in 2000 transformed Ethan Hunt (Tom Cruise) into a kind of Hong Kong action star, complete with ballet-like fight sequences, slow-motion, and shots of doves flying into the sky. In 2006, J. J. Abrams brought the series back to its roots while infusing it with his penchant for character drama—even secret agents need a home life).

So what to expect from Mission: Impossible - Ghost Protocol with director Brad Bird, the man behind The Iron Giant, The Incredibles, and Ratatouille? Sure enough, this is M:I at its most animated—not a cartoon, but truly action-packed.

Ghost Protocol finds Hunt imprisoned in Moscow, where an Impossible Missions Force (IMF) team breaks him out. Hunt learns that the IMF needs his help in recovering the launch codes for a nuclear sub, which a crazed Russian strategist plans to use to help spark the next stage of human evolution ("survival of the fittest").

Complicating matters is a terrorist attack at The Kremlin while Hunt and his team try to gain intel. The IMF is blamed, and the U.S. government is forced to shut it down. The "ghost protocol" of the title refers to Hunt operating without government aid. His resources are limited, including just three team members to support him: tech expert Benji Dunn (Simon Pegg reprising ... 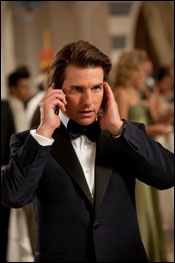