It is a little past noon on a blustery, sunny Saturday in late October, and Mavis Staples takes the stage in front of over 200,000 people on the Washington Mall. At 71, Staples is a veteran of similar massive gatherings.

The gospel musician sang at the inaugurations of former presidents Kennedy, Carter, and Clinton, and appeared with Martin Luther King Jr. at dozens of civil rights rallies in the 1960s. But she is on the Mall today at the request of comedians Stephen Colbert and Jon Stewart, whose Rally to Restore Sanity and/or Fear is about to take a humorous but not-so-gentle poke at the histrionic polemics and hand-wringing that have recently characterized political dialogue in America.

As she and Jeff Tweedy, the founder of indie rock band Wilco, launch into "You Are Not Alone," the title track from her latest album, she's taking no prisoners:

A broken dream, a broken heart
Isolated and afraid
Open up, this is a raid
I wanna get it through to you
You're not alone

It is intended as a healing balm for a troubled and divided nation, and it is, as it has always been, the only real and lasting antidote for fear. She is singing the gospel of Jesus Christ, which is the answer that still matters most to Mavis Staples. She's been at the forefront of political change in the United States for the better part of fifty years, so it's more than a cause. It's a life.

"It's hard times for many people," she told me after the rally. "People are losing their jobs, losing their homes. There's a lot of fear out there. And that song, 'You Are Not Alone'—that's the song we wanted to communicate to everyone, that we are all in this together. You don't have to do this by yourself. 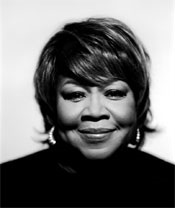