A sober, realistic treatment of exorcism, and a thoughtful depiction of doubt and faith.
Steven D. Greydanus|January 28, 2011
Our Rating

The Rite really wants to get it right.

In some ways, Mikael Håfström's new film reminds me less of recent exorcism films than of the sort of movie that Terence Fisher made for Hammer Films in the late 1950s and 1960s, movies like The Devil Rides Out and the 1958 Dracula. If Father Lucas, an unconventional veteran exorcist working in Rome, had been played by Hammer icon Christopher Lee instead of Anthony Hopkins, he would have been right at home.

On the other hand, Michael Kovak (newcomer Colin O'Donoghue), a doubting seminarian roped into a Vatican-sponsored training initiative for new exorcists, belongs to the postcritical milieu of The Exorcism of Emily Rose, Requiem and The Last Exorcism. Michael is among the more thoughtfully skeptical characters in this type of movie, proposing naturalistic explanations for possible supernatural phenomena when he can, and citing other unexplained phenomena when he can't. Still, Michael seems to respect the priesthood more than some of his less troubled classmates; he rolls his eyes at the future clerics in the dorm room across the hall playing violent video games. "Honestly?" he mutters rhetorically, pushing his door closed.

This is not a world in which demons manifest openly or in which sacred objects like crosses or holy water are omnipotent over the forces of darkness. Exorcism in The Rite is a long, drawn-out process that can last for weeks, months or even longer. In that way, among others, The Rite is probably the most sober, realistic treatment of exorcism in Hollywood history. It's also a pretty thoughtful depiction of doubt and faith—one of a tiny number of exorcism films, along with the original Exorcist and The Exorcism of Emily Rose, that offers a spiritual, even theological take on what most films in the genre treat as mere horror-movie trappings.

Fr. Lucas goes so far as to tweak the godfather of all exorcism movies. "What were you expecting?" he asks Michael after their first go-round with a troubled, very pregnant Italian girl (Marta Gastini). "Spinning heads and pea soup?"

A movie that goes there had better not fall back on the old clichés itself. The Rite is only partially up to its own challenge. There are no spinning heads, but bodies contort in ways that come close, and while there's no pea soup, we do see something even more spectacular vomited up.

The Rite ekes gratuitous creepiness from Michael's background: His father is a mortician, and there are disturbing flashbacks to Michael as a boy helping his obviously troubled father (Rutger Hauer) tend the body of Michael's mother. And there's some unexplained spookiness around a charm bracelet, or a pair of bracelets, linking a body in Michael's father's morgue to one of Fr. Lucas's exorcees. Are the charms occult symbols? Was the woman in the morgue another victim of diabolical influence? Or is it just misdirection, or don't the filmmakers know? The Rite even falls back on that tiredest of clichés, the jump scene that turns out to be only a cat. Honestly?

Although The Rite stumbles when it lapses into standard horror tropes, Hopkins' easy authority and sense of calm urgency go a long way toward making the realistic exorcism scenes credible, and he negotiates both the better lines and the sillier ones with aplomb. (He's much better here than he was sleepwalking through last year's late-winter horror turkey, The Wolfman.) O'Donoghue, an active Catholic and a TV and stage veteran making his big-screen debut, ably conveys Michael's intelligence and uneasy sense of suspension between belief and unbelief, and Alice Braga is effective as a sympathetic journalist who generates some tension with the seminarian without either of them crossing any lines they shouldn't. 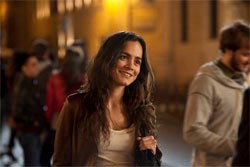 Most of the movie is set in Rome, and I had fun picking out locations I know. (My favorite moments were realizing that the camera was about to turn around and reveal Saint Peter's Basilica, or the Pantheon.) Catholic imagery abounds: crucifixes, images of St. Therese of Lisieux and the Sacred Heart of Jesus, and so on. All in all, it's the most positive depiction of the Church and of Christian faith I can think of in any recent Hollywood film. Hostile critics may even dismiss it as religious propaganda, but it deserves more credit than that.

There's little evidence of Fr. Lucas's reported "unorthodoxy," though he does have a rather Tillichian understanding of the relationship between faith and doubt. "Be friends with your doubts, because those are the things that will drive you on," Fr. Lucas tells Michael. At another point he says, "At times I've experienced total loss of faith—day, months when I don't know what the hell I believe in—God or the devil, Santa Claus or Tinker Bell. Yet there's something that keeps digging and scraping away inside of me. Seems like God's fingernail. And finally, I can take no more of the pain and I get shoved out from the darkness into the light."

The priests working on a case (Marta Gastini)

The film is loosely inspired by journalist Matt Baglio's nonfiction book The Rite: The Making of a Modern Exorcist, which documents the training of a real-life exorcist, Fr. Gary Thomas of San Jose, California, who went to Rome in 2005 to apprentice with an experienced exorcist. If there's one aspect of Fr. Gary's experiences, or the experiences of any good exorcist, that I wish had gotten justice in the film, it's the reality that psychological problems rather than demonic influences are at the root of most troubled people's problems. Throughout the film, Michael tells Fr. Lucas that the people he's seeing need a psychiatrist, not an exorcist. In a movie that strives for realism in many respects, I would have liked to see Fr. Lucas run across a case that led him to the same conclusion.

The Rite is rated PG-13 for disturbing thematic material, violence, frightening images, and language including sexual references. Depictions of demonic possession appear throughout, with many of the usual manifestations: blasphemous, taunting utterances, physical contortions, and what one character calls a "reptilian appearance," etc. There are a number of deaths, including of a significant character, and scenes set in a mortuary where dead bodies are being cleaned and prepared, including flashbacks to a young boy helping his father prepare his mother's body. There are a few profanities and crass sexual remarks and one PG-13 f-bomb.