In an early scene, 13-year-old Robbie (Jonah Bobo) sums up the plot of Crazy, Stupid, Love when he tells his dad Cal (Steve Carell) two simple words: "Love sucks." Robbie believes this because he has a huge crush on Jessica (Analeigh Tipton), his 17-year-old babysitter, who thinks he's just a kid—and who's secretly hot for Robbie's dad. Cal, meanwhile, agrees with Robbie because Emily (Julianne Moore), his high school sweetheart and wife of 25 years, has just told him she had an affair and is divorcing him.

Then we meet Hannah (Emma Stone), who is dating a "nice enough" coworker named Richard (played by a wincingly awkward Josh Groban) and fending off horrible pickup lines from players when she goes out with her friends. And even Emily is emotionally wrought over leaving Cal to see if things play out with her office paramour, the homewrecking David Lindhagen (Kevin Bacon).

Pretty much, everyone's a mess.

But Cal, our main mess, begins to find hope in, of all places, the local bar, where he's retreated to drown his pain. Tired of listening to Cal's sad-sack rambling night after night, player extraordinaire Jacob Palmer (Ryan Gosling) agrees to take on Cal—and over the coming weeks he transforms him from Supercuts and stammering to tailored suits and swagger. Think the shopping spree makeover scenes from Pretty Woman with a suburbanite guy and his metrosexual mentor instead of a leggy prostitute. In other words, movie gold.

The delightful cast, the snappy dialogue, and the twisty plot lines make some of the familiar rom-com terrain seem fresh and fun. Carell is certainly in familiar territory here as a lovable loser (more Dan in Real Life here than The Office). It's no surprise he endears us as Cal. The real surprise ... 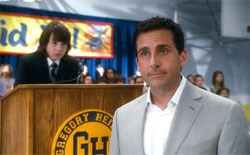