Two documentaries look at the making of the KJV.
David Neff|June 8, 2011

If you like swashbucklers, Norman Stone's 90-minute KJB: The Book that Changed the World, new on DVD, may be the best way for you to observe the 400th anniversary of the publication of the 1611 Authorized Version of the Bible. There are plenty of men in tights, not to mention clerical robes. They whisper political intrigues, plans to (literally) undermine the government, ride horseback through muddy fields, clang swords, and meet in solemn assemblies. Veteran actor John Rhys-Davies (Raiders of the Lost Ark, Lord of the Rings) "presents" (in the British sense) the story with theatrical flair that teeters on the brink of self-parody. 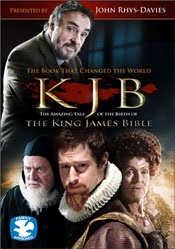 The film presents James Stuart—also known as King James I—as a brilliant monarch who took control of the political and religious landscape of England from his first moments on the throne. Unlike other monarchs, says Oxford don Peter McCullough, James had no learning curve, since he had previously wrestled the competing political and religious factions of Scotland into submission. Indeed, the young king showed that he could keep the factions off balance by interrupting the Puritan spokesman at the Hampton Court Conference, calling his proposals "a litany of dullness blown out your buttocks," and then giving the participants whiplash by granting the Puritan request for a new Bible translation and putting the opposing Anglican bishops in charge of the project. Sweet.

Ah, but maybe you aren't the swashbuckling type and prefer sipping a soothing herbal tea to swigging Red Bull. If so, Jerry Griffith's 42-minute KVJ: The Making of the King James Bible (2010) may be your choice. The film has minimal historical re-enactment and substitutes a focus on the language choices faced by translators. It does not, however, ignore the political tensions of the 17th century. 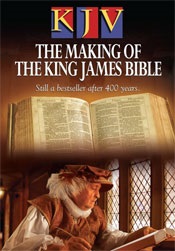 The Latin Vulgate translates the opening verse of Psalm 23, Dominus regit me, as "the Lord rules me." Such language fits the thought world of a monarchy. God is a king. The king is like God. And so forth. But the Geneva Bible, a KJV predecessor beloved by 16th-century English Protestants, portrayed God as a shepherd in the language now familiar to us. Such language choices not only made for a more accurate English rendering of the Hebrew text, it expanded the believer's view of God's tender care. The Geneva Bible—notorious for its marginal comments—frequently used the word "tyrant" in reference to kings. This was no doubt one reason James favored a new translation and specified that it would have no notes.

Perhaps this film's greatest asset is Adam Nicolson, author of the 2003 book God's Secretaries: The Making of the King James Bible. His knowledgeable, witty commentary and chipmunkish charm provide an excellent framework for this even-tempered documentary.

David Neff is editor in chief of Christianity Today.