Malick's magnum opus about the beginning and end of the universe, and a Texas childhood in between.
Brett McCracken|May 27, 2011
Our Rating

Terrence Malick's The Tree of Life is a magisterial symphony of sprawling scope and grand vision. Like the symphonies of the masters Malick clearly admires—Berlioz, Brahms, Bach, Mozart (all of whom show up in Life)—the film is a work of passion that consumed the reclusive writer/director for many years. Like the greatest composers, Malick's ambition here is nothing less than to capture the meaning of life, to create a lasting masterpiece that probes the biggest questions and reflects upon our human struggles, using the forms of cinematic beauty rather than the words of philosophy. Few filmmakers go near the "big questions" any more. But Malick's magnificent Life could change that. It's the sort of film that could awaken a cynical generation of filmmakers to rediscover the possibilities of the form.

Eschewing traditional cinematic narrative, Life is structured in movements. The film is bookended by allegro movements—sweeping montage visions of the universe coming into being and a grandiose finale evoking what could be interpreted as a Christian eschatological climax. In the middle is the adagio section—a slower-paced, intimate observation of one Texas family in the 1950s. Though the spectacles of the beginning and end are jaw-dropping (dinosaurs, molecular reproduction, asteroids, a cosmic light show), it's the middle section that reveals the most truth. Here, in one humble corner of a universe unimaginably large and complex, the true mystery of existence is manifest: A father, mother, children, love, death, hate, forgiveness, reconciliation. Together, this micro memoir and macro meditation form nothing less than a virtuoso triumph that will be talked about, remembered, studied, and treasured for decades. ... 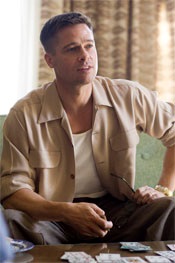