Ryan Gosling as a pro driver in an artsy—and hyper-violent—film noir that’s more style than substance.
Brett McCracken|September 16, 2011
Our Rating

The opening scene of Drive is, appropriately, a car chase. But it's clear early on that this is not a car chase film in the Fast and the Furious style. With nary a word spoken in its first ten minutes, save a police radio commentary and a sportscast of a Clippers basketball game, Drive sets itself apart as an art film from the get go: quietly intense, curious, ironic, oddly paced, retro (pulsating '80s techno soundtrack and pink font opening titles straight out of 1987), and very self consciously cinematic.

As it unfolds, the structure of Drive mimics the stop-and-go, twist-and-turn nature of driving in Los Angeles. Trance-like, almost meditative stretches are regularly interrupted by brief, jarring explosions of intense violence. Frequent gear-shifts in tone—between wide-eyed earnestness and campy ridiculousness—match the temperament of the alternately sweet and psychotic protagonist (Ryan Gosling). But does this journey ever get anywhere, or is it just a joyride through the landscapes of pulpy, freeform cinematic indulgence?

The plot of Drive—directed by Danish up-and-comer Nicolas Winding Refn—is standard fare for a L.A. noir film. Based on the 2005 novel of the same name by James Sallis, Drive tells the story of a brooding, morally complex man-of-few-words (Gosling, aka "Driver") who falls in love with the wrong girl (Carey Mulligan) and becomes something of a father figure to her little boy (Kaden Leos). Turns out the girl has a shady husband (Oscar Isaac) who comes home from prison and instantly gets in trouble with mobsters, enlisting Driver to help with a heist. (Driver works as a stunt car driver for the movies by day and a getaway driver for criminals by night.) Predictably, the heist goes ... 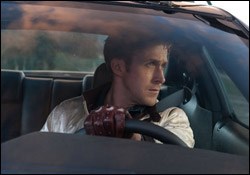