The gritty and challenging story of a real-life Christian and his quest to serve God, by any means necessary.
Todd Hertz|September 23, 2011
Our Rating

Machine Gun Preacher is based on the true, complex story of a violent, angry, drug-dealing convict who finds Jesus. But the character's conversion is not the climax; it's only the beginning of his story—and of the film's gritty and honest exploration of a messy faith.

After coming to Christ, ex-con and drug addict Sam Childers founded a Pennsylvania church and felt called by God to become a freedom fighter in East Africa. After seeing the firsthand the tragedy of kids caught in Sudan's civil war, Childers built an orphanage. Not being content, however, with merely sheltering the kids targeted by the brutal Lord's Resistance Army (LRA), Childers went on the offensive. With hired Sudanese soldiers, Childers leads dangerous military missions to retrieve kidnapped children. His autobiography, Another Man's War, sums up his mission this way: "Save the children, no matter the cost," and the movie's tagline is, "Hope is the greatest weapon of all."

In exploring Childers's controversial methods, the dark, R-rated, and explicit Machine Gun Preacher is provocative, faith-affirming, and challenging. Made by Relativity Media (300, American Gangster, Charlie Wilson's War) and directed by Marc Forster (Quantum of Solace, Monster's Ball, The Kite Runner) and executive-produced by star Gerard Butler (300), this is the story of a Christian told by mainstream filmmakers. And it does so much right. By merely being real, sticking to storytelling and not trying to sell something, Machine Gun Preacher helps model what Christian-made films could be. Instead of showing faith with a tidy, safe sheen, Childers's Christianity is shown as the mysterious, dynamic, and intricate force that it is.

It's clear the filmmakers didn't want a one-note profile ... 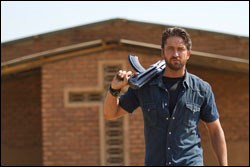