Some people are mystified by those who love baseball. It's so boring, they say. Nothing happens. And there's so many games. Who can keep on top of it all?

Baseball fans know this is true (after all, the best part of some games is the hot dog). But something about the game is still compelling to our national imagination. It's hard not to feel patriotic when (and here I reveal my biases) listening to the national anthem in Fenway Park. And when I'm asked why I like the game, I say I was raised by a father from south Boston and am therefore genetically impelled to be a Red Sox fan.

Yet there's something more than that, and that something is what Moneyball captures—and in such a way that even baseball haters will find themselves gripping the armrest around the 100-minute mark.

The film—based on an excellent book by journalist Michael Lewis—begins with the Oakland A's losing the American League pennant to the Yankees at the end of the 2001 season. The Yankees, of course, have the biggest payroll in baseball, and the A's have the smallest, putting them at a distinct disadvantage. That's the same reason they're losing both Jason Giambi (to the Yankees) and Johnny Damon (to the Red Sox), and they have little hope of having a good season the next year, without the ability to pay great players.

The team's general manager, Billy Beane (Brad Pitt), is fed up: his scouts aren't giving him players that can make a winning team, and his owner can't give him money to buy better players. After trying to make trades in a particularly frustrating meeting with the Cleveland Indians, Billy runs into Peter Brand (Jonah Hill), a Yale economics graduate who is convinced the way teams are managed is all wrong. Brand claims that scouts ... 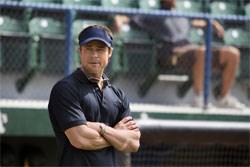