An emotionally arresting meditation on what happens after tragedy, with no easy answers.
Alissa Wilkinson|January 20, 2012
Our Rating

Reader, you're likely here to find out if Extremely Loud & Incredibly Close is worth your time. You're looking for an assessment of its virtues and vices, its strengths and its failings. Maybe you read Jonathan Safran Foer's novel on which it's based and—like me—thought it was an unlikely candidate for adaptation to the big screen. You want to know what you'll think when you see it.

I could start by telling you about the plot: Oskar (Thomas Horn) is an odd boy, living in Manhattan with his family, when the "Worst Day" happens—September 11, 2001. Oskar is certainly precocious, a wealth of information about the world ("Did you know humans are the only creatures who can cry?") and might have Asperger syndrome (though, he tells us, the test results were inconclusive). His devoted father (Tom Hanks) has spent an enormous amount of time devising "reconnaissance missions" (scavenger hunts) that also help him break out of his shell and move past his fears. Oskar has lived his whole life in the happy knowledge that his father adores his mother (Sandra Bullock), and if he's feeling lonely, he can just use his walkie-talkie to talk to his grandmother, who lives across the street.

But then the Worst Day happens, taking Oskar's father away, and the boy's slow discovery of the new shape of his life changes him forever.

A year later, in a moment of rare courage, Oskar ventures for the first time into his father's closet and discovers a vase on the top shelf; when he accidentally breaks it, he discovers a key inside, tucked inside a tiny envelope with one word written on it: Black. His father's last reconnaissance mission for him! This key must unlock something important, and since Oskar can feel his father's presence receding ... 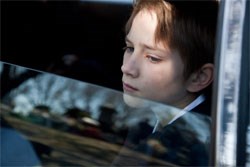