Gospel meets Glee in this choir-filled film, but it's hard to find anything worthy of praise.
Lisa Ann Cockrel|January 13, 2012
Our Rating

I might be a liturgical Anglican at heart, but I am a sucker for a gospel choir. The full-throated harmonies, the hand-clapping, the robes. We will not talk about the years during which I could frequently be found singing and dancing along to the Sister Act soundtracks in my room, because that would be embarrassing. But trust me when I say that I was eagerly anticipating Joyful Noise, featuring Queen Latifah and Dolly Parton as Vi Rose Hill and G. G. Sparrow, respectively, both vying for control of a small-town church choir as it competes for national recognition.

Unfortunately, Joyful Noise does gospel choirs no favors with its superficial depiction of the faith that is ostensibly the wellspring of this passionate music. But as a former AWANA Olympian, I know that we Christians can make a contest out of just about anything. At their best, these gospel competitions are celebrations of excellence—and sometimes you just have to roll with it. But I still cringed when in a climactic scene Vi Rose vigorously exhorts a drowsy crowd that God is worthy to be praised in an effort to get them clapping and improve the choir's chances of winning. That's just awkward. Can I get an amen?

But the singing competition is actually just a backdrop to the real competition between G. G. and Vi Rose. When G. G.'s choirmaster husband Bernard (Kris Kristofferson) dies suddenly during the annual Joyful Noise showcase, the church board promotes his second in command, Vi Rose, much to the chagrin of the widow. As a wealthy patron of the church, G. G. isn't afraid to throw her weight around a little bit, but stops short of blackmail. Mostly. The bottom line is that conservative Vi Rose and flashy G. G. just don't like each other on principle. And ... 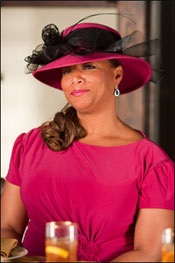