A lackluster heist film with too many plausibility issues.
Camerin Courtney|January 27, 2012
Our Rating

There's an early scene in Man on a Ledge where the main character does something strange: He easily opens a New York City hotel window. Okay, yes, he also climbs through said window to assume the title role. Also strange. But anyone who's ever been to a high-rise hotel in a big city will tell you that the windows are sealed tighter than a Hollywood starlet in a pair of Spanx.

Why is this important? I'll get to that in a minute.

First you should know that our man on the ledge is Nick Cassidy (Sam Worthington), an ex-cop who's just broken out of prison. He was serving a 25-year sentence in Sing Sing for a stealing a huge diamond from a crooked rich guy. Nick was framed, of course, but this could never be proven because, as we later learn, there were some inside people involved in the cover up.

Let out of prison for a day for his dad's funeral, Nick manages to escape and go about trying to prove his innocence. His standing out on that ledge is part of the plan—and so is an intricate heist going on across the street. Another part of the plan is requesting forensic psychologist Lydia Mercer (Elizabeth Banks) as his main contact with authorities, a woman just jaded and blonde enough to trust him and his rugged good looks.

Worthington does a decent job as a good cop turned angsty inmate turned calculating fugitive turned would-be jumper, especially given that he spends most of the movie balancing on a foot or so of concrete. It's nice to see Jamie Bell, who plays Nick's younger brother Joey, out of his typical dancing shoes and period-piece dress. He's likable here, even if he is a goofy klutz one moment and a smooth criminal the next.

Most of the rest of the cast are given such flimsy material to work with that I don't really ... 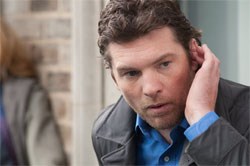