It's been just a couple weeks since the 10th anniversary of the 2001 release of The Royal Tenenbaums, Wes Anderson's quirky-but-true depiction of family life. A dysfunctional family, perhaps, but then, aren't we all?

If Romans 1 teaches us anything, it's that we've all got a bit of knowledge in us somewhere. Knowledge of a God who saves, knowledge of a stain on the human soul. To be human is to know that one's greatest problem is self-absorption. The immediate effect: separation. The long-term catastrophe: death. The other side of the coin says that the greatest longing of the human heart is to be redeemed, to be made acceptable, to be loved beyond degree.

When The Royal Tenenbaums released, some proclaimed it to be pretentious, overly involved and woefully unnecessary while others applauded the cinematography, gorgeous shot composition and riffs on the key of family dysfunction. So don't bite the critics' forbidden fruit just yet. A decade later, let's take a moment to observe the echoes of Eden and glimpses of redemption this film brings to the table.

As the movie begins, we see director Anderson's ideal of an untainted creation: three whiz kids surrounded by a stylized Manhattan. This is New York as dreamt up by a bookish 15-year-old who has fallen asleep with Salinger in his lap. Green Line Buses and Gypsy Cabs flitting through the streets. Everyone is a cosmopolitan: symmetrically coiffed and impeccably dressed, intellectually astute and financially secure. In the Andersonian world, life is best perceived on the rooftops of high-rises.

There's Margot, the award-winning playwright; Chas, who can crunch numbers and predict financial trends with stunning accuracy; and Richie the "Baumer," a tennis prodigy with the sweetest ... 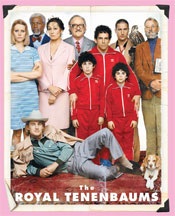