In 2042, time travel hasn't been invented yet. But in 2072, it has, and it's also been outlawed. So it's used by the mob to send the people they want to dispose of backward to 2042, where guys called loopers get paid a lot of money to off them in cornfields with huge guns called blunderbusses.

Joe (Joseph Gordon-Levitt) is one such looper. The city where he lives in 2042 has seen better days: for the most part, life here is the proverbial nasty, brutish, and short kind, even for the 10 percent of the population who have developed the strange ability to make quarters float with their minds. Their motorcycles are more like hovercraft and their technology is advanced, but there are plenty of people who live in housing projects covered with graffiti and scavenge for a living. The high life for someone like Joe, whose stash of silver from his job is impressive and growing, is mostly found in fast cars, late nights partying at clubs, and taking drugs through eyedrops—all with fellow loopers, like the hapless Seth (Paul Dano). Seth and Joe work for Abe (Jeff Daniels), who was sent from the future to run the looper operation.

Life is an endless cycle of partying, paid sex with women, drugs, and jobs with the blunderbuss. But then one day, loopers start discovering their victims are, well, themselves—thirty years in the future. This has happened before—they call it "closing the loop"—but now it's happening more and more frequently. Rumor has it some shadowy figure in the future called "The Rainmaker" is closing all the loops. 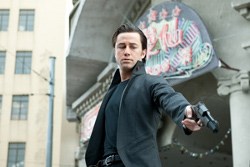