A man, the phone he is dating, and the incomparable gift of the Incarnation.
Brett McCracken|December 18, 2013
Image: Warner Bros.
Joaquin Phoenix in 'Her'
Our Rating

Her is not a conventional Christmas movie. If anything, its sherbet pastel color palette (reportedly inspired by smoothie chain Jamba Juice) lends the film an Easter flavor.

Set in Los Angeles of the near future (perhaps 50 years from now), Her follows lonely Theodore Twombly (Joaquin Phoenix, typically pitch perfect) as he purchases the world's first artificially intelligent smart phone. It's called OS1, and it's billed as "not just an operating system; a consciousness." Created to learn and evolve, Theodore's "OS," named Samantha (voiced by Scarlett Johansson), quickly calculates the precise personality, affectation, and sense of humor that will best meet Theodore's needs. She "reads" entire books in less than a second, composes piano sonatas on the fly, and devours information, ideas, literature, and art with the voracious energy of a curious child. Yet Spike Jonze's creepy/sweet/profound film about a romance between a man and his (extremely) smart phone is Christmasy in spite of itself, for one main reason: it's a film about incarnation.

Morose in the midst of a divorce from his wife Catherine (Rooney Mara), Theodore is drawn to Samantha because she's genuinely excited about discovering the world. This is an all-too-rare disposition in a world where most humans walk around drone-like, talking to themselves (or rather their earpiece OS) rather than each other and preferring digital fictions to material realities.

Theodore's occupation is telling: he works for Beautifulhandwrittenletters.com, a company where customers pay to have ... 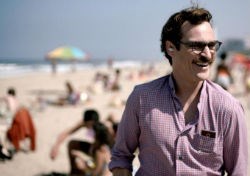