Lots of explosions but not much heart makes this a film that will please most but might leave fans disappointed.
Kenneth R. Morefield|May 17, 2013
Our Rating

The most brilliant marketing move in J. J. Abrams's wildly popular 2009 reboot of the Star Trek franchise might have been skipping any attempts at continuity that might hamstring the ability to alternately reference and revise Federation history—whatever was most convenient in any particular scene. More impressively, it did it while managing to not alienate its fan base. Trekkies are famously so rabid, so steeped in the minutiae of each Star Trek franchise, that they were once mocked by William Shatner in a Saturday Night Live skit in which he told rabid conventioneers to "get a life."

The 2009 reboot's plot twist let Leonard Nimoy make a cameo, and it set up the new series' parameters: Spock and the audience retain all memory of past movies, but Federation history, as recorded in those films, is no longer unalterable. Things can now happen differently than they did before. It was like an Etch A Sketch got wiped clean.

This erasure seemed like a high price to pay just to give Abrams and company a bit more narrative freedom. The destruction of Vulcan aside, the first movie also didn't seem as troubled by the theological implications of changing history as was, say, the last season of Abrams's television series Felicity.

The greatest remaining continuity link between the previous films and the new ones is the inclusion of plenty of Easter eggs to make the initiated feel—in this order—smart ("lose the red shirts") and nostalgic ("the needs of the many outweigh the needs of the few"). Beyond that, these are ... 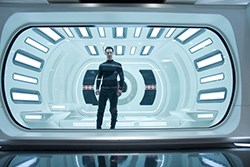