Ant-Man has all the right parts, but it's time for Marvel to start taking the issues it raises seriously.
Jessica Gibson|July 17, 2015
Image: Marvel Studios
'Ant-Man'
Our Rating 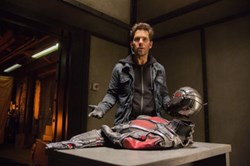 Marvel Studios has done it again: Ant-Man is a good superhero movie.

And once again, that’s just about it.

From all indications, the excellent Avengers: Age of Ultron earlier this summer (which I had the pleasure of reviewing here) was a once-in-a-franchise fluke as a Marvel film that sought to be more than the sum of its parts. Ant-Man has all the right parts, but in Ultron’s wake and at the forefront of a long upcoming lineup of films, it really is time for Marvel to start doing better.

Right parts or no, Ant-Man is a filler movie. Its only real purpose is to tide us over in the lull before Captain America: Civil War next year. The most exciting scene in the whole movie isn’t even in the movie, it’s the Civil War related post-credits bonus.

All that said, by the simple fact that it runs on the (very) tried-and-true Marvel formula, Ant-Man has enough of the classic superhero origin elements to still be an enjoyable flick. Celebrated scientist Hank Pym (Michael Douglas) is the mysteriously omniscient, Mr. Miyagi-style mentor; Darren Cross (Corey Stoll) is the bitter young genius whom said mentor personally slighted; Hank’s daughter Hope (Evangeline Lilly) is the sharp-witted protégé with a tough exterior who’s really so sweet once you get to know her.

The three are engaged in undercover corporate war over a formula Hank developed in the 80s that changes the space between atoms, allowing objects to shrink and grow at will. Cross is on the verge of completing his own version of the formula, a horrible act that would, of course, threaten the entire planet and therefore must be stopped at all costs.

And stumbling into this adventure is the unwitting crook with a heart of gold, Paul Rudd. His character’s name is Scott Lang, but his performance is so single-layered that it really feels like we’re just watching Paul Rudd wander around with a dazed look on his face and a smart-alecky quip to throw out every ten minutes. Not that it isn’t still fun to watch.

Scott’s been recently released from prison for a Robin Hood-esque burglary that’s afforded him enough celebrity to be praised by and then fired from his first job on the outside. Despite the accolades for his criminal life, Scott’s determined to stay on the straight and narrow for the sake of his young daughter. But the financial demands his ex-wife makes in order for him to see his daughter push him to steal from, who else? Hank Pym. 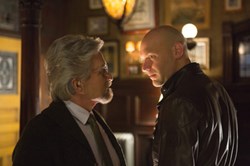 Scott shows off his criminal talent, steals Hank’s original Ant-Man suit, tries it on out of curiosity, and ends up zooming through indoor plumbing at the size of an insect. An arrest, miraculous escape, and training montage later, Scott’s all set to help Hank and Hope save the world. The tropes are endless in this film, but if you can drop your cynicism for the genre long enough, the superhero standards can still be enjoyable.

What’s much harder to get around are the troublingly problematic cultural tropes the film uses for its own convenience without any self-awareness. It’s not the first; Marvel has a terrible track record when it comes to diversity of any kind in its movies. Even Age of Ultron had its own inexcusable problems with race and gender. But Ant-Man’s disregard for minorities and tough social issues becomes a more serious problem when it uses those elements as nothing more than contextual set dressing.

Take the struggling ex-con narrative, for instance. The pieces and parts mostly make sense: when Scott gets out of prison he’s broke and needs a place to stay, and he’s overqualified for the jobs that are available for him. His ex-wife demands he behave responsibly and provide child support for their young daughter in order for Scott to have a presence in her life.

But the entire plotline is made unconvincing and uncomfortable when Scott’s humbling job search is turned into a joke and his strikingly upper middle class family demands he pay child support. The details are right, but the stakes aren’t there. They don’t need to be. This is Marvel, after all; the only stakes they deal in are the vaguely world-ending kind. With that perspective, the small-time struggles of a family reconnecting after a prison sentence aren’t significant enough to be treated respectfully.

Then there are Scott’s teammates, Luis, Kurt, and Dave. Luis and Dave are the only people of color in the film, and both are as stereotypical as they come. Worse, their characters are used for jokes, and their situations—ex-cons weighing the benefits of returning to crime and trying to get back on their feet—are as unacknowledged as Scott’s. The details are provided for context and plot service, then ignored, once more for plot service, and above all before they have the chance to provide dreaded social commentary.

I’m not demanding every Marvel film tackle every social issue in the right way every time. But I am challenging Marvel storytellers to acknowledge that they are capable of flexing their creative muscles a little more. All they have to do is reach a little ways back into their own history. Marvel comic books frequently pushed the boundaries of acceptable social narratives: Stan Lee famously tackled drug abuse in Amazing Spider-Man #96-98 in 1971, and TheX-Men comics have served as social metaphors for everything from racism to censorship since 1963.

I want that Marvel back. I want to see superhero stories that entertain and engage. I want Marvel to rise above the appealing complacency of films like Guardians of the Galaxy and Ant-Man that have no cultural significance beyond proving that Marvel can make good movies. I want to have my cake and eat it too, because if anyone can make those kinds of crazy stories happen, Marvel can.

Standard warning for sci-fi violence: lots of explosions, flashing lights, punches, and gunshots, but no gore to speak of. A character is killed by a gadget that reduces him to a small pile of goo that gets callously wiped up and flushed down a toilet by the villain. The same happens to a lamb brought in for an experiment, sans toilet-flushing this time. There’s a smattering of curse words, and the only sexual content is a euphemistic insult, a joke about touching a woman’s boobs, and an interrupted kiss.

Jessica Gibson is a writer and a student at The King’s College in New York City. She tweets only to fangirl and gripe @GibbyTOD.