After going extinct in 2001, the franchise returns with a familiar warning: Don’t play God. (But it sure makes for a fun ride.)
Mark Moring|June 11, 2015
Image: Universal Pictures
'Jurassic World'
Our Rating 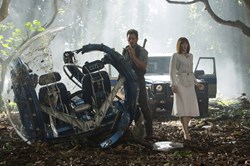 In the days leading up to the release of Jurassic World, there have been stories aplenty about the plausibility of the science behind the premise of the whole thing: “Could modern man create dinosaurs from DNA that’s millions of years old?”

The scientists in Michael Crichton’s excellent 1990 novel, Jurassic Park, certainly could. And so could the genetic engineers in the first three films of the franchise of the same name, which released in 1993, 1997, and 2001.

Now that 14 years—and gazillions of scientific breakthroughs—have elapsed since the last film, people are asking the question again. Could it happen?

It’s easy to find articles refuting the notion. Business Insider even published a story titled “5 science facts Jurassic World totally ignored,” including a list of all of the movie’s dinosaurs that didn’t even live during the Jurassic Period. (Party poopers.)

And there are articles about how much science has progressed since 2001, noting that we’re closer than ever to being able to pull it off. Jack Horner, the paleontologist who has served as a consultant on all four films, says the new movie is “scientifically more plausible” than its three predecessors.

There is the pesky fact there is zero dino DNA to be found anywhere. And even if there were, scientists say it couldn’t have survived more than a million years or so.

But all the stories and hypotheses ignore the bigger question lurking behind it all. It’s the same question Crichton explored in his novels and the same one that Ian Malcolm, the quirky “chaotician” played so deliciously by Jeff Goldblum in the first two films, asked all along.

“Yeah,” Malcolm tells one character in 1993’s Jurassic Park, “but your scientists were so preoccupied with whether or not they could that they didn't stop to think if they should.”

And that’s the point. Crichton’s book was meant to be a cautionary tale about tinkering with nature and biology, akin to Mary Shelley’s Frankenstein. The Jurassic Park movies—including the just-released Jurassic World—all ask variations of the same question: Should we be playing God?

Jurassic World wastes no time getting right to it. The opening scene looks like an aerial view of a desert, some vast wasteland. Postapocalyptic imagery? The shape of things to come? The picture becomes a little clearer once a crack appears in the landscape, and you realize it’s a close-up of an egg—a dinosaur egg. And something is hatching. The camera zooms in on the claws. The creature’s eye opens, and the ominous music plays.

The whole scene, which lasts barely a minute, plays out in a pristine room called the “Creation Lab.” One of the scientists notes that the hatchling is not a result of breeding, but that “she was designed.” We’re only moments into the movie, and already the words “creation” and “design” are on the table. Think the folks in the white lab coats are meant to be perceived as wannabe “gods”? Of course they are.

In case we didn’t get it, characters keep reminding us: “You know you’re never really in control.” “Jurassic World exists to remind us how small we are.” “You might’ve made them in a test tube, but they don’t know that.” “If I don’t innovate, someone else will.”

But here’s the thing: You can wrestle those Big Questions, if you want.

Me? I mostly just wanted to see how awesome dinosaurs would look with today’s CGI. And people running for their lives. And maybe a few get eaten—bad guys, of course.

Jurassic World delivers on all of those fronts, and then some. Fittingly, watching this movie about a theme park is a lot like going on a thrilling roller-coaster ride. Lots of twists and turns, ups and downs, with just a moment here and there to catch your breath.

And these are unquestionably the most awesome dinosaurs to hit the big screen. I saw it in IMAX 3D, so the wow factor was through the roof. These dinos are some bad dudes, and you’ll jump back in your seat more than once, I promise.

The baddest of the bunch is Indominus rex, a super-big, super-bad hybrid created in the lab. (Remember the line, “We designed her”?) She’s like a T-rex on steroids—bigger, faster, stronger, and meaner. And way smarter. (You’ll learn why.) If she breaks loose from her paddock, well, that’s not all that will be breaking loose.

But perhaps the best thing about the movie is that, unlike the original trilogy, we actually have an action hero this time. Chris Pratt, so enjoyable in TV’s Parks & Recreation, has quickly become a real movie star, with his breakout role in Guardians of the Galaxy last year, and now this. He’s an action hero with good looks, snark, and a wink, bringing grit and wit to the role. (A young Harrison Ford?)

Here, Pratt plays Owen Grady, a staff worker at the Jurassic World theme park, located on Isla Nublar, the same island where the whole saga began with 1993’s Jurassic Park. Owen’s specialty is training Velociraptors—the lightning fast, highly intelligent killing machines that almost stole the show from T-rex in the original film. Here, Grady is a lot like a lion tamer, only without the whip. The raptors under his command follow his directions—but you feel like they could disobey at any moment and tear his head off.

Meanwhile, the head of park security, a detestably cocky dude named Hoskins (Vincent D’Onofrio), wants to use the raptors for military purposes, to train them to kill the enemy. He’s over-the-top despicable, and you just want him to get eaten already.

Bryce Dallas Howard plays Claire Dearing, the park operations manager. She’s dressed impeccably, all in white. Her makeup is perfect, and not a hair is out of place. She’s sharp, professional, and ostensibly in complete control . . . but of course, she isn’t. That’s the illusion. When dinosaurs decide to wreak havoc, there’s no stopping the wreaking.

The two boys you’ve seen in the trailer are Claire’s nephews, Zach and Gray, visiting the park and supposedly getting some good hang time with their aunt. But Claire’s too busy to pay much attention, and the boys end up exploring on their own. When the boys are in danger, Claire suddenly takes note . . . because now her mission is to make sure her sister’s kids don’t end up in the belly of the beast.

Claire turns to Owen to try to save the day while cold-blooded predators are running (and flying; yes, there are pteranodons, yay!) amok. It turns out just as Dr. Malcolm predicted in the franchise’s second film: “Yeah, ooh, aah, that’s how it always starts. But then later there’s running and screaming."

There’s lots and lots of running and screaming. And it’s a barrel of fun, if you—like me and my family—like these movies.

Jurassic World includes plenty of nods to the original film, and Jurassic Park fans will appreciate every one of them. (I counted about 10, but there are likely more.)

A female colleague has a snappy comeback, but Malcolm has made his point.

Don’t play God. But if you do, don’t be surprised if you end up on the lunch menu on an island crawling with massive prehistoric creatures. And get ready to run and scream.

From the edge of your seat in a dark theater, it’s actually a lot of fun.

Jurassic World is rated PG-13 for intense sequences of science-fiction violence and peril. Yes, it’s intense, and yes, there’s plenty of peril. But the filmmakers showed a lot of restraint too. Though people die in gruesome fashion—eaten by dinosaurs—it’s rarely graphic or gory. There’s a little bit of bad language, but tame by PG-13 standards. Take that “13” part seriously. This is a scary movie that will really frighten youngsters. Unless you want your young ’un crawling into your bed in the middle of the night complaining of nightmares, show some discretion and hire a sitter.

Mark Moring is a writer in Atlanta. His wife, Nina, went into labor while watching the original Jurassic Parkin a theater in 1993—right when the Tyrannosaurus breaks through the roof of the car and tries to eat the children. Hours later, Mark and Nina’s son was born. They resisted the urge to name him Rex, but went with Paul instead.