Bring tissues: anchored by outstanding performances, this story of a mother and son is uncommonly moving.
Alissa Wilkinson|October 14, 2015
Image: A24
Jacob Tremblay and Brie Larson in 'Room'
Our Rating

The first shots of Room are close-ups, so tight that that it's hard to make out what we're seeing in the quick shots on screen. A finger, maybe. The side of a toy. The light is muted and there's breathing, then the soft voices of a woman and a small boy. This could be an intimate family scene, set anywhere in the world.

But this is emphatically not anywhere in the world: it is Room, and the voices are from Ma (Brie Larson) and Jack (Jacob Tremblay). Today is Jack's fifth birthday. He has never been outside of Room; he and his mother have been imprisoned here by Old Nick since before he was born. Young but determined to make a world for her son, Ma has managed to raise him as healthy and happy as he can possibly be, under the circumstances, spinning tales of the world beyond Room, teaching him to read, inventing games and occupations.

Emma Donaghue scripted Room based on her celebrated 2010 novel, and as directed by Lenny Abrahamson (Frank), it's one of the best films of the year. The screenplay treads as lightly as it possibly can given the subject matter—largely because the story is narrated by and viewed primarily through Jack's eyes. Everything is a marvel to him, from Skylight and Sink and Mouse to his imaginary puppy Lucky.

We see Ma's—Joy's—physical and psychological struggles through his eyes, which keeps the film from straying into an exploitation flick. The depraved elements are almost entirely off-screen, existing mostly in our imaginations, and we also fill in many of the story's details. Jack, just a child, doesn't have the capacity to imagine these things.

And this is important, because it is a story about a woman kidnapped and held in captivity as a sexual slave for years, something we slowly come to understand over the film's first act. If we didn't know from the news that this actually happens to women, it would seem overly lurid. As it is, Room is a sensitive and even uplifting but very realistic psychological drama about abuse, depression, courage, and a lot more, even if the story of its inciting situation is terrifying, especially for women.

It's also unblinking in how it tackles the matter of parenting, and the most complicated of repercussions. This accounts for the emotional gut-walloping you get repeatedly: parental love is never perfect, and everyone screws up their kids in their own particular way. The film uses this as a thread throughout, and it is uncommonly visceral. I am not a crier and I watch so many films that my emotional radar is probably a bit dulled, but I was moved by this film in ways I rarely have been, and it's been difficult to explain why. 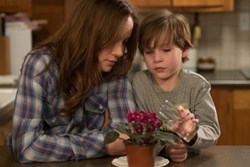 There is some link between Room and the Netflix comedy The Unbreakable Kimmy Schmidt. You raise your eyebrows, but consider: they are both about young women kidnapped as teenagers and kept imprisoned well into their adult years, and about life thereafter. Both also function on a (much) lower level as extreme dramatizations of the emotional havoc that oppression wreaks on lives.

Some have criticized Kimmy Schmidt for trivializing the repercussions of that abuse (though I think the end of the season indicates that's coming). I don't find that quite as troubling; it's a silly comedy, though it has its dark side. Room, though, is free to focus on how the mind deals with these things, making the distinction between the adult brain and the more “plastic” neural responses of a child. It links mental, physical, and emotional health, then sets that down into intimate familial relationships.

All this is punched up at least a few notches by the outstanding Brie Larson, whose performance in this film exhibits startling range even if you're already a fan (and I am). Her character's determination not to voice anything to Jack that would trouble him means she has to rely even more on an eyelid twitch, a tear, a single line in a furrowed forehead to clue us in as the grown-ups. Larson's work is always stellar (everything from the marvelous Short Term 12 to playing Abed's confidently nerdy girlfriend in the last couple seasons of Community) and with Room, she may finally get the name recognition she deserves. And that shouldn't downplay Tremblay, who is so assured that I was only distracted from the film by thinking about how good he was. There is nothing self-consciously cute or mannered in his brave portrayal of Jack.

If this all sounds too intense for you—well, you're not wrong. It is intense, but not for the reasons you might expect, and also loving and moving. Room lacks (and even explicitly critiques) the can't-look-away true crime hallmarks we've come to expect from more sensationalist work. But it dives straight into the wounds that both love and brutality can inflict, then pokes around in them for a while. Bring the tissues, and be ready to call your mom when you leave.

From the plot, you can tell already that this is not a film for children or many sensitive teenagers, though it is worth watching for many adults. The thematic material alone could be too much. However, almost the whole film centers on the interaction between family members, so the crime that's being committed gets filled in largely by the imagination. We briefly hear, but do not see, several sexual encounters; the horrific implications of what's going on here are far worse. A few scenes of abusive violence, though not bloody. Several outbursts that include profanity. There are several brief scenes in which we realize that Jack is still being breastfed, but we don't see anything.

Alissa Wilkinson is Christianity Today's chief film critic and an assistant professor of English and humanities at The King's College in New York City. She is co-author, with Robert Joustra, of How to Survive the Apocalypse: Zombies, Cylons, Faith, and Politics at the End of the World (Eerdmans, May 2016). She tweets @alissamarie.