I first met “Carmen” and her husband after church one morning in midsummer. Raised in Spain, Carmen had been baptized as an infant and had a nominally religious background. She’d recently moved to Canada and, after a series of events, including the death of a friend named Grace and an early morning Google search, she found Grace Toronto Church—and arrived the first time wearing her pajamas.

Carmen kept coming back, week after expectant week, growing more eager to read and understand the Bible for herself. Her bursting curiosity and acute spiritual hunger struck me when she and her family came over for lunch several weeks later. In late August, I asked Carmen to join me and two other women in studying the Bible.

The book we studied together? Deuteronomy.

A Very Good Place to Start

In the early years of our marriage, my husband, Ryan, and I often led evangelistic Bible studies with colleagues and neighbors. We’d read and discuss Scripture passages, usually from the Gospels, sharing observations and fielding questions. I can assure you that we never offered to study Deuteronomy with our spiritually seeking friends.

It can be tempting to feel like the Old Testament is something to be embarrassed about, with its purported misogyny, accounts of genocide, and sexually repressive rules. Deuteronomy (and some other Old Testament books) might be likened to the eccentric uncle you hope will miss this year’s Thanksgiving dinner. Yes, your odd uncle is a part of the family, but it might be safer to introduce him to your boyfriend once there’s a ring on your finger.

No doubt, there are challenges in reading Deuteronomy with a spiritual seeker—and I worried about all of them. Deuteronomy gives readers a glimpse of a God willing to punish an entire faithless generation, scattering their bodies across 40 years in the wilderness. It commands one nation to violently dispossess other nations. At times, it makes for tedious reading with its arcane names of people and long-disappeared places. These complexities hardly seem to commend the book to someone who is just beginning to explore the life of faith. 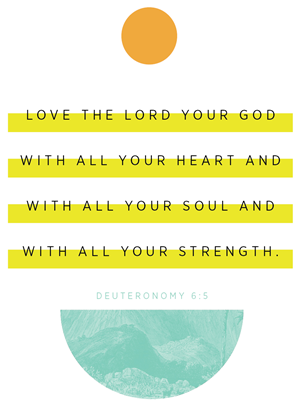 Still, I had theological convictions about this book’s contemporary relevance. Set on the plains of Moab after Israel’s 40 years of wilderness wandering, Deuteronomy rehearses Israel’s chronic failure to love God and obey his commands. Its effect is the “anguished conscience” that Martin Luther wrote about as necessary for salvation. While Deuteronomy does not explicitly introduce Christ, it helps readers long for him.

Consider, for example, Robert Alter’s vivid translation of Deuteronomy 32:4–5: “The Rock, His acts are perfect, for all His ways are justice. A steadfast God without wrong, true and right is He. Did He act ruinously? No, his sons’ the fault—A perverse and twisted brood.” Deuteronomy puts humanity squarely on the hook for its own moral misdeeds, leaving no room for excuses. It magnifies human depravity—and with it, our need for grace.

More importantly, Deuteronomy depicts a God who is patient and persistent in his love—a God who does not give up on his people. He is intolerant of sin but equally intolerant of his people’s estrangement. Deuteronomy ends with Moses, having been warned about Israel’s future failures, dying with a blessing on his lips for this rebellious nation. There is gospel to be found in Deuteronomy.

Building the Tower of Faith

When crowds thronged around Jesus during his public ministry, he often drove them away with hard sayings. Carry your cross. Drink my blood. Love your enemies. Jesus explained his strange methodology in Luke 14:25–33, comparing the spiritually curious person to a potential investor in a capital project: “For which of you, desiring to build a tower, does not first sit down and count the cost, whether he has enough to complete it? Otherwise, when he has laid a foundation and is not able to finish, all who see it begin to mock him” (vv. 28–29, ESV).

Just as investors must assess not just reward but also risk, spiritual seekers are asked to do a similar kind of accounting—sizing up the promises of faith as well as its demands. With its theme of obedience, Deuteronomy helps readers set out on the way of faith and also journey forward. It is a book for evangelism as well as for discipleship—or, better, for evangelism that has discipleship as its goal rather than simply conversion.

As an early example, in Deuteronomy chapter 1 it becomes clear that the God of Israel is a speaking God and that his words are binding words. Israel is judged for rejecting these words at Kadesh Barnea, when they refused to trust God’s promises to give them the land. Authority, in Deuteronomy, is located in the words of God.

This principle alone provided a lot of vigorous discussion in our group. Like so many in our secular age, Carmen had assumed that the only binding authorities in her life were her own desires, preferences, and intuitions. But through the lens of Deuteronomy, she began to understand that faith required submission of these desires, preferences, and intuitions to God’s revealed truth. She began to see that love for God is expressed as obedience. Reading Deuteronomy provided Carmen far more than a window-shopping look at faith—it allowed her to honestly consider what faith asked of her.

Even as Deuteronomy emphasizes strict obedience in the life of faith (it uses the word “carefully” 15 times), it’s also a book that spotlights our inability to obey God as carefully as he requires. At the end of the book, what God makes clear to Moses is that Israel is incorrigible. Despite hearing Moses’ five eloquent sermons, once Israel crosses the Jordan River, they will forget the history of God’s miraculous deliverance and be seduced into idolatry. They will keep none of their promises to God, and as a result, they will not keep the land.

In Deuteronomy, obedience is portrayed as both essential and impossible—and this hard lesson is actually Deuteronomy’s best news. To love God with the entirety of one’s heart, soul, and might requires a spiritual surgery that only God himself can perform. As Carmen put it after discussing Deuteronomy 10:16, “God can really upset you if you don’t have a circumcised heart.”

Deuteronomy has proven to be disruptive—and fruitful—reading for Carmen. As we’ve met, I’ve been reminded of the potency of God’s Word. We can’t be shy about asking spiritually curious people to engage with Scripture—even books like Deuteronomy. And as we ask, we can rely confidently on the active help of the Holy Spirit. Even when we can’t answer every question, the Spirit will illuminate gospel truth.

Soon our group will finish Deuteronomy and begin the Gospel of John. On one hand, it certainly would have been easier to introduce my spiritually seeking friend to God’s Word through the fourth Gospel—where we see that God clothed himself with flesh and “moved into the neighborhood” (1:14, The Message). On the other hand, I already eagerly anticipate the important connections we’ll make between the speaking God of Deuteronomy and his eternal Word, Jesus Christ. Deuteronomy will have readied us to understand the fullness of life that Jesus came to give.

Reading Deuteronomy has given Carmen the confidence to poke around in other parts of the Old Testament. This past Easter, she finished reading Exodus. “Hold on a second,” she said in a voicemail left on Good Friday. “Before Jesus died—before he even came in history—there was this Passover and the liberation of the Israelites from Egypt. Jesus also died at the Passover. He is the lamb, and his blood saves us.” Carmen, who is now a committed follower of Jesus, concluded, “I think it’s beautiful.”

Jen Pollock Michel is the author of A Habit Called Faith: 40 Days in the Bible to Find and Follow God (Baker, 2021). She lives with her husband and their five children in Toronto.