The Republican candidate said that although he disagrees with McCain on many issues, his prolonged candidacy would make it easier for a Democrat to win.
Sarah Pulliam Bailey
February 07, 2008 12:14 PM

Mitt Romney suspended his bid for the Republican nomination today.

He said that if he continued, it would "forestall the launch of a national campaign, making it easier for Sen. Clinton or Obama to win."

Marc Ambinder at The Atlantic describes how the crowd did not know it was coming and began to boo after they figured it out.

"Now, I disagree with John McCain on many issues," he said, drawing a chorus of anticipatory boos – they thought Romney was going to start to attack McCain. "But I agree with him on doing whatever it takes to be successful in Iraq."

See the full transcript for Romney's comments on religion in his speech.

"Americans love God, and those who don't have faith, typically believe in something ... 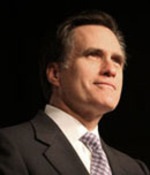