Artist Michael D'Antuono was planning to unveil "The Truth" - a portrait of President Obama wearing a crown of thorns and holding his hands in crucifix form - tomorrow in New York's Union Square to commemorate Obama's 100th day in office, but decided to cancel after receiving thousands of angry e-mails about the portrait's religious overtones.

The portrait, which shows Obama lifting a dark veil to reveal (or hide) the presidential seal, was not meant to offend Christians or make light of their beliefs, D'Antuono told Mark Hemingway of National Review Online. He explains:

The idea of the piece, or the reaction that I'd hoped for, was to highlight our nation's deep partisan divide and how our interpretation of the truth is really prejudiced by our political perspective and I think that to a large degree we are being manipulated by the media. I miss the old day when we just have the facts. Now we have pundits and spin and strategists.I just thought that through that painting people would ... 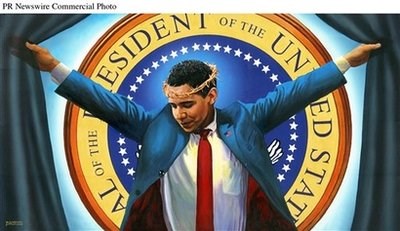