Doug TenNapel – animator, graphic novelist, video-game designer and occasional collaborator with one of my favorite musicians of all time, Terry Scott Taylor – continues to rack up the movie deals. The Hollywood Reporter says his newest graphic novel, Ghostopolis, has been picked up by Disney – and Wolverine star Hugh Jackman is set to produce and star in the film version:

The story centers on a man who works for the government's Supernatural Immigration Task Force. His job is to send ghosts who have escaped into our world back to Ghostopolis. When a living boy accidentally is sent to the other side, the agent must team with a female ghost (and former flame) to bring him back.

This would be at least the fourth movie deal that TenNapel has made in the last few years – Paramount has Monster Zoo, New Regency has Creature Tech and Universal has Tommysaurus Rex – but this marks the first time that an actor has been attached to one of them, as far as I can recall.

Whether any of these films will ... 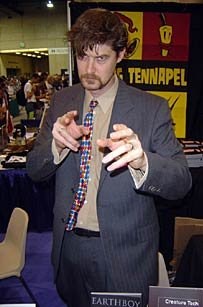