Apple's iTunes App Store has removed a program for the Manhattan Declaration after critics decried the declaration as "anti-gay" and "anti-woman."

The app, which went online in October, enabled users to sign the declaration, visit the website, and take a survey relating to the declaration. Change.org posted a petition–which picked up over 7,000 signers in a few days–asking that Apple remove the "anti-gay and anti-choice" application.

Defining itself as "A Call of Christian Conscience," the 4700-word declaration announces its signatories' intention "to affirm our right—and, more importantly, to embrace our obligation—to speak and act in defense" of principles that include "sanctity of human life, the dignity of marriage as a union of husband and wife, and the freedom of conscience and religion." Released in 2009, the declaration has picked up over 400,000 signers, including drafters Charles Colson, Robert George, and Timothy George. (CT's editor-in-chief David Neff also signed the declaration.) ... 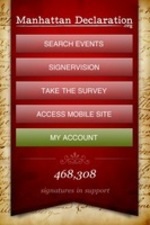