Patriotism God Gap: Is the U.S. the Greatest Country in the World?

New data offers evidence for a patriotism God-gap in America. Evangelicals are most likely to think that the U.S. is the best country in the world, according to a poll by the Pew Research Center for the People and the Press. Those with no religion, however, hold a much less rosy view of the country.

Nearly all Americans think they live in the best country on earth. While a majority of Americans believe there are other countries just as great, nine-in-ten say no nation is better. Within this high view of America, there are differences between different religious groups.

Four-in-ten Americans agreed that "the U.S. stands above all other countries in the world," according the Pew Political Typology poll that asked 1,525 Americans about their view of the United States. Evangelicals (52 percent) were the more likely to hold the view that the U.S. stands above other countries. Nearly all of the other evangelicals surveyed said "the U.S. is one of the greatest countries in the world, along with some others." Only 3 percent said they believed there were other countries better than America. 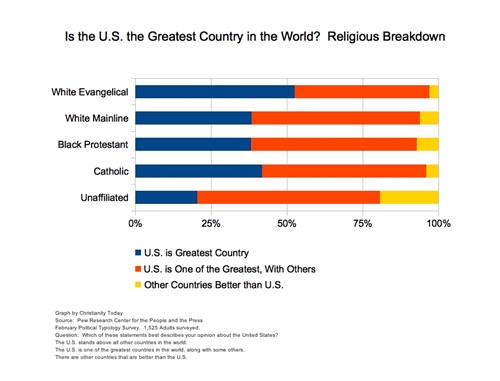 This high view of America is echoed by evangelical leaders. For example, just last month BreakPoint's Chuck Colson told listeners "America was – and is to this day – different. It was founded on a shared belief." Colson said this belief was encapsulated in the opening of the Declaration of Independence–-"that all men are created equal, that they are endowed by their Creator with certain unalienable rights, that among these are life, liberty and the pursuit of happiness."

"These are the words that Americans live for – and if necessary, die for," Colson said.

Other Christian traditions were less enthusiastic about America's position in the world, but they still saw the U.S. as one of the best on the planet. About 40 percent of other Christians said the U.S. stands alone as the greatest country; around 55 percent said it and some other countries were equally great. As with evangelicals, only a few said there were greater countries in the world.

Those with no religion stand out as being much less likely to see the U.S. as the greatest country. Only 20 percent said the U.S. was the best country in the world. The same percentage said "there are other countries that are better than the U.S."

These results reflect a patriotism "God Gap" that CT Politics reported on in other polls. In an April Pew poll, evangelicals were the most likely to say that they displayed the American flag on their clothing, in the office, or around their home. Those Americans unaffiliated with religion were the least likely to put the flag on display.

Editor's Note: The Pew Research Center for People and the Press provided Christianity Today with a religious breakdown of questions from the poll. However, CT is responsible for all analysis and interpretation of the results. Pew identifies evangelicals as white, non-Hispanic Protestants who described themselves as "born-again or evangelical." Around 18 percent of Americans are evangelicals by this definition. The margin of error for each religious group is larger than for the sample as a whole. The results are descriptive; religious differences could be due to partisanship, ideology, income, or other factors.

Patriotism God Gap: Is the U.S. the Greatest Country in the World?

Patriotism God Gap: Is the U.S. the Greatest ...