Editor's Note: The new Pew survey will be explored further in the August issue of CT.

At the same time, their counterparts in Africa, Asia and Latin America are far more optimistic.

"There's both a huge optimism gap and a huge influence gap in terms of the way these folks perceive things," said Luis Lugo, director of the Pew Forum.

The Rev. S. Douglas Birdsall, executive chair of the Lausanne Movement, which worked with Pew on the survey, said the U.S. pessimism is rooted in a changed culture where Billy Graham has retreated from public life and government-sponsored prayer has ... 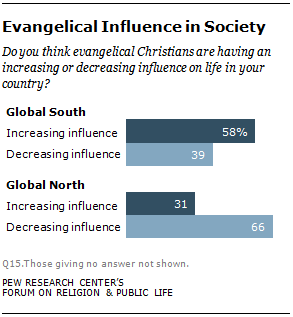