Update (May 7, 2013): The Miami Herald reports on the trend of Baptist churches changing their names and "quietly moving away from their denomination's historic namesake–worried that it conjured up images of pipe organs, narrow-mindedness or stuffy, formal services."

Recent research suggests that the decision to drop denominational references in church names is a double-edged sword.

The task force appointed to study a possible name change of the Southern Baptist Convention is recommending the convention maintain its legal name but adopt an informal, non-legal name for those who want to use it: Great Commission Baptists.

The report Monday night ended weeks of speculation by Southern Baptists and fellow evangelicals as to what the task force would do. The convention was formed in 1845, and a name change was first proposed in 1903, although one was not adopted then, or since. 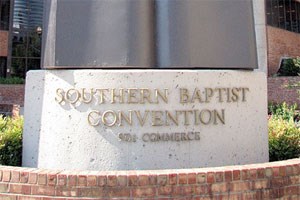