Pastors agree that division over origins harms outreach, but disagree on why.
Melissa Steffan|May 16, 2013 11:30 AM

American pastors have significantly different views on human origins based on where they live, according to new Barna Group research commissioned by BioLogos.

Somewhat predictably, pastors in the South are most likely to believe in young-earth creation (YEC), with 58 percent supporting YEC or leaning toward that position. But the regional stronghold of theistic evolution (TE) is not where you might think.

Pastors in the Midwest effectively tied the Northeast as most likely to believe in TE, whereas pastors from the West were least likely to support TE. (Other differences in clergy views can be found in the infographic below.)

Overall, the research results, based on interviews with nearly 750 pastors, shows that a slight majority (54%) of Protestant pastors across all regions most closely identify with YEC. One out of eight pastors were classified as "uncertain" about their beliefs. (Definitions of how theological positions were defined are at bottom of this post.) 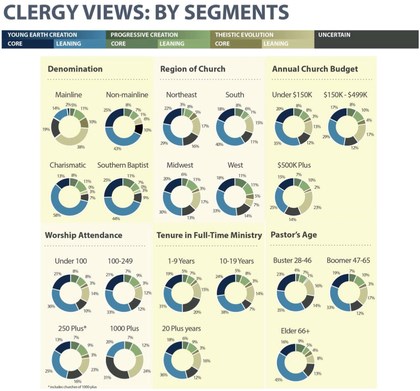