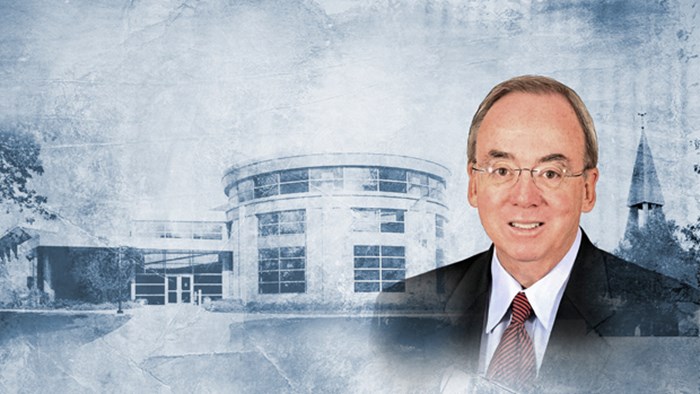 He replaces Craig Williford, who opted not to renew his contract last year and instead take a sabattical after leading TIU through the largest capital campaign in the school's history.

"We are indeed grateful to be given the privilege to provide leadership for an institution with a strong commitment to the preparation of leaders for the global church, an opportunity that we find both exciting and daunting, inviting and intimidating," Dockery said in TIU's announcement (full text below). "To be granted such a key leadership role for the larger evangelical community in this country and around the world for the coming years of the 21st century is certainly a great blessing and a joyful opportunity to contemplate."

As president of Union, Dockery recently responded to a campus tragedy involving two commuter students where a Christian Studies student allegedly shot and killed his fiancée, also a student, and adjusted the scene to look like a suicide.

In a statement, Dockery said, "words motivated by hatred or judgment are not helpful to anyone. I want to encourage us to pray for all the families connected to this tragedy."

Dockery, a Birmingham native, was chief academic officer and professor of theology and New Testament at Southern Baptist Theological Seminary prior to his Union role. He has written or edited 35 books, including several on biblical interpretation, and edits three academic series on faith, learning, and biblical scholarship. He also served on the board of directors for the Council for Christian Colleges and Universities (CCCU), Christianity Today International, and Prison Fellowship.

Dockery steps down in June from his presidency at Union and will begin serving as president of TIU on June 1. Union University trustees on Feb. 10 named Samuel W. Oliver, president of East Texas Baptist University, as his successor.

CT noted when Williford left Denver Seminary (where he served as president) in 2009 to come to TIU. (He was replaced by Gordon MacDonald.) CT also regularly notes TIU, especially its Center for Bioethics and Human Dignity, as well as Trinity Evangelical Divinity School (TEDS). TIU hosts the Carl F.H. Henry Center for Theological Understanding, named for the man who birthed evangelicalism, and TEDS hosts the Jonathan Edwards Center, named for the man regarded by many asAmerica's foremost theologian.

"We are overwhelmingly grateful to God for the invitation from the Trinity Board to serve the students, staff, faculty, and various institutional constituencies in the days ahead," Dockery said. "We are humbled by the confidence that the Board has communicated to us in this call to guide Trinity forward in the days and years to come."

Robert Kleinschmidt, chairman of the TIU Board of Regents, said he was excited for Dockery and his wife Lanese to join the TIU family.

"Dr. Dockery brings a great wealth of experience and knowledge about higher education from his years at Union University," Kleinschmidt said. "I know he will be a great leader for Trinity and look forward to the tasks ahead."

Located in Deerfield, Ill., Trinity International University consists of Trinity Evangelical Divinity School, one of the most highly respected evangelical institutions in the country; Trinity College, a liberal-arts based institution; Trinity Graduate School, with programs in such fields as biomedical ethics, leadership, and education; and Trinity Law School, located in Santa Ana, Calif. Total enrollment for the university is about 2,800.

"What a joy it will be to seek to reflect the influence and leadership of 20th century evangelical giants like Kenneth Kantzer and Carl Henry, who invested so much at Trinity," Dockery said.

"Their emphasis on serious and rigorous academics shaped and informed by the gospel of our Lord Jesus Christ, the full truthfulness of Holy Scripture, international missions, cultural renewal and engagement, transdenominational and transcontinental evangelical cooperation and service to the global church will, we trust, continue to characterize all aspects of Trinity's life and work."

During Dockery's 18-year tenure as Union University president, the institution saw 16 straight years of increasing enrollment and more than doubled in size, growing from a fall enrollment of 1,972 to 4,288 in 2013. Donors increased from 1,600 to 6,000 annually. The budget expanded from $18 million to more than $90 million per year, and the university's net assets grew from less than $40 million to $120 million.

Judy Bradish, co-chair of the TIU presidential search committee, said Dockery has "demonstrated Christ-centered, excellent, effective and visionary leadership that we believe he will bring to Trinity."

"We as a committee feel confident that Dr. Dockery is the leader TIU needs at this point in our history," added Paul Mang, also co-chair of the search committee.

EFCA President, Bill Hamel, served on the Search Committee and sits on TIU's Board of Regents. "I look forward to presenting Dr. Dockery to the EFCA Board of Directors and the Conference for final affirmation. His proven leadership and mainstream evangelical positions will make him a great partner with the EFCA in preparing students for service in the gospel."

Prior to his administration at Union, Dockery served as the chief academic officer at Southern Baptist Theological Seminary in Louisville, Ky., where he also was professor of theology and New Testament.

Dockery is the author or editor of 35 books, including such titles as Renewing Minds, Faith and Learning, Theologians of the Baptist Tradition, New Testament Interpretation and Criticism, and Biblical Interpretation Then and Now.

Dockery served as the chairman of the board for the Council for Christian Colleges and Universities and was a board member for Christianity Today International and Prison Fellowship. He has spoken at major conferences and lectureships at dozens of churches, state conventions, colleges, churches and seminaries.

A native of Birmingham, Ala., Dockery and his wife Lanese have been married for 38 years. They have three married sons and six grandchildren.

"David Dockery is truly an evangelical statesperson," said John D. Woodbridge, research professor of church history and the history of Christian thought at Trinity Evangelical Divinity School. "He is one of the most respected Christian educators, authors, theologians, and biblical scholars in the United States. Members of the community at TIU look forward to giving Dr. Dockery their full and enthusiastic support as he leads them in creating an education for students that integrates the gospel of Jesus Christ with a first-class education."

TIU formed a presidential search committee in July 2013 to find a successor to former president Craig Williford. Neil Nyberg is serving as TIU's interim president for the 2013-2014 academic year.

"We are indeed grateful to be given the privilege to provide leadership for an institution with a strong commitment to the preparation of leaders for the global church, an opportunity that we find both exciting and daunting, inviting and intimidating," Dockery said. "To be granted such a key leadership role for the larger evangelical community in this country and around the world for the coming years of the 21st century is certainly a great blessing and a joyful opportunity to contemplate."

Dockery will begin serving as Acting President on June 1. He will officially assume the TIU presidency when affirmed by the conference of the Evangelical Free Church of America.

Read on for a more detailed biography of David S. Dockery.

Trinity International University is a private, Christian university comprising four schools: Trinity College, Trinity Evangelical Divinity School, Trinity Graduate School, and Trinity Law School, as well as three academic centers: the Carl F. H. Henry Center for Theological Understanding, the Center for Bioethics & Human Dignity, and the Jonathan Edwards Center at TEDS. An educational ministry of the Evangelical Free Church of America, TIU is located on the north shore of Chicago, with regional centers in South Chicago, Florida, and California, and extension sites throughout the Midwest. TIU exists to educate men and women to engage in God's redemptive work in the world by cultivating academic excellence, Christian faithfulness, and lifelong learning. Visit the University online at tiu.edu.