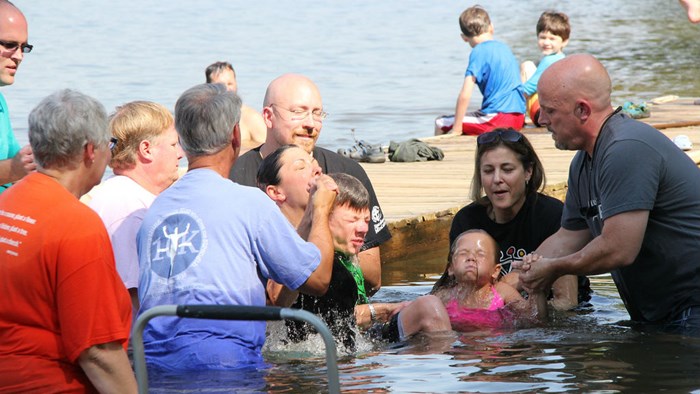 Update (June 2): Timothy George, founder of Samford University's Beeson Divinity School, offers his reflections on why the baptism report is "remarkable for its candor and for the stark analysis it presents."

The "heartbreaking slide" in Southern Baptist baptisms has now entered its seventh year. While the loss of nearly 4,600 baptisms was not as steep as last year's drop, the continued decline (full stats below) is still enough for LifeWay Christian Resources president Thom Rainer to tell Baptist Press, "I am grieved we are clearly losing our evangelistic effectiveness."

And according to a recent report by a special task force of pastors, the baptism drought in America's largest evangelical denomination—which counts 15.7 million members and 5.8 million Sunday worshipers—is worst among millennials.

In last year's Annual Church Profile, 60 percent of the more than 46,000 churches in the Southern Baptist Convention (SBC) reported no youth baptisms (ages 12 to 17) in 2012, and 80 percent reported only one or zero baptisms among young adults (ages 18 to 29). One in four Southern Baptist churches reported zero baptisms overall in 2012, while the "only consistently growing" baptism group was children under five years old.

"The problem is even greater than these numbers indicate," states the task force report. "Considering how the North American population has increased substantially between the 1950s' baptism peak and today, these figures indicate how much ground we have lost and are losing."

Fewer churches are contributing statistics to the denomination's annual report these days. But the task force notes, "Although it would be convenient to blame declining baptisms on declining reporting, our statisticians concluded that we still have a steady decline in baptisms even when a lack of reporting is factored into the equation."

The report identifies five problems behind the baptism drought:

Spiritual: "Many of our SBC pastors and churches are not effectively engaged in sharing the gospel and yet continue business as usual. We need a sense of brokenness and repentance over the spiritual climate of our churches and our nation."

Leadership: "Many pastors have confessed to being overwhelmed in the operation and ministries of the church to the neglect of being involved in regular personal evangelism. This lack of leading by example is negatively impacting our church members' engagement in personal evangelism."

Discipleship: "Many pastors have confessed to focusing on attendance while giving little attention to reproducing fruit-bearing disciples who are involved in intentional evangelism."

The Next Generation: "Although our churches have increasingly provided programs for children, students and young adults, we are not being effective in winning and discipling the next generation to follow Christ."

Celebration: "Many of our churches have chosen to celebrate other things as a measure of their success rather than new believers following Christ in baptism. We have drifted into a loss of expectation."

"We pray this will be the first step in a movement that encourages greater evangelistic impact and reverses the decline of baptisms in Southern Baptist churches," stated the task force, committing to pursue five solutions.

While the number of SBC churches increased, reported membership of those churches declined by 136,764, down 0.9 percent to 15.7 million members. Primary worship attendance declined 2.21 percent to an average of 5.8 million Sunday worshippers.

CT noted the debate over purging SBC membership rolls in 2008, and recently examined whether spontaneous baptisms are good for the church, after Southern Baptist pastor Steven Furtick's Elevation Church made headlines for baptizing 3,519 people in the first eight months of 2013.

Highlights from the 2013 Annual Church Profile: 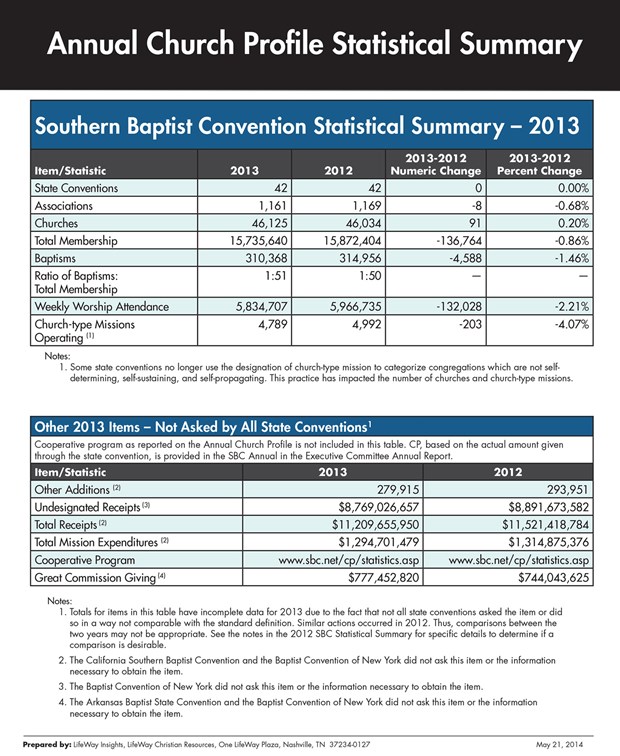 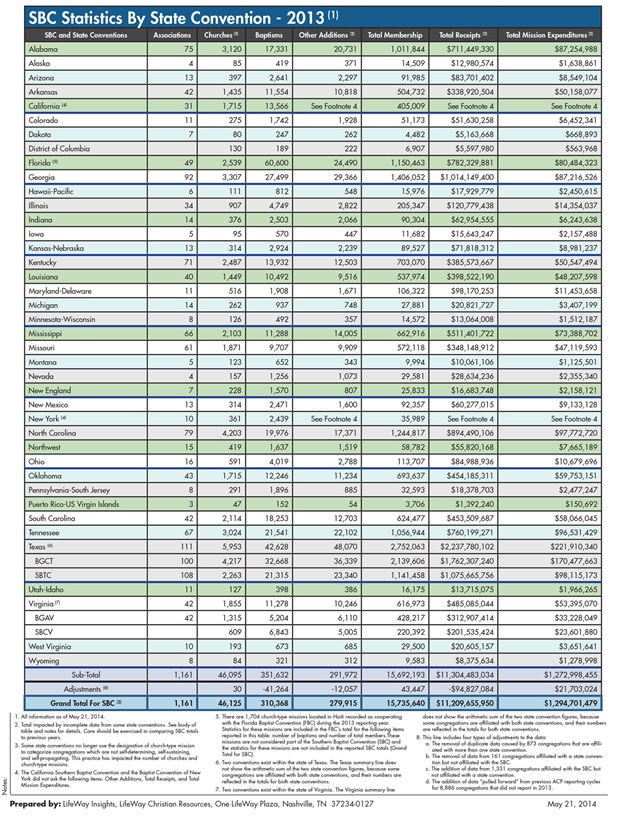