Yet Southern Baptists still provide by far the most chaplains.
Bob Smietana|April 23, 2015 10:57 AM 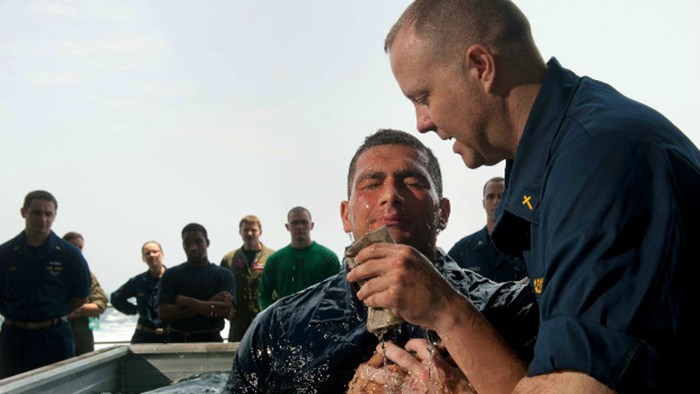 Likely presidential candidate and former Southern Baptist pastor Mike Huckabee recently urged Christians to stay out of the military until after the next election, saying they are no longer welcome.

“Why would they want to be in a military that would be openly hostile and not just simply bring some scorn to their faith, but would punish them for it?” Huckabee said in a recent interview.

In recent years, enough of his fellow Southern Baptists have left active duty that atheists now outnumber the denomination among soldiers.

According the latest Department of Defense statistics on religion, there were 12,360 Southern Baptists among the US military’s 1.3 million members on active duty as of December 2014. There were also 12,764 atheists—an advantage of 404 over Southern Baptists.

The role of faith in the military has been controversial in recent years.

A Pentecostal chaplain faces discipline after complaints about his teaching on sexual ethics. That prompted a group called the Restore Military Religious Freedom Coalition to collect more than 100,000 signatures on a petition backing the chaplain.

The Washington Times recently predicted a mass exodus of Christians from the military.

And back in 2013, a series of since-discredited rumors alleged that the military would court martial Christians who tried to evangelize their fellow soldiers.

About 7 out of 10 (69.8%) active-duty service members identified as Christian in 2014, according to the Defense Department. They range from 345,888 non-denominational Christians to two members of the European Free Churches.

Non-denominational Christians (26%), Nones (20.4%), and Roman Catholics (20.4%) are the largest groups in the military, followed by Baptists (9.3%), which is a separate category than Southern Baptists.

The Pentagon’s numbers show a slight decline in the percentage of Christians in the military over the past six years, from 71.2 percent in March 2009 to 69.8 percent in December 2014, but no mass exodus.

Despite the growth in the number of atheists, there remain no atheist or humanist chaplains. In 2014, former youth minister turned religion scholar Jason Heap sued the US Navy after they turned down his application to become a chaplain.

CT’s previous coverage of the military includes whether Wheaton College can require its ROTC program be run by a Christian, whether women should serve in combat, and how to treat veterans in your church.