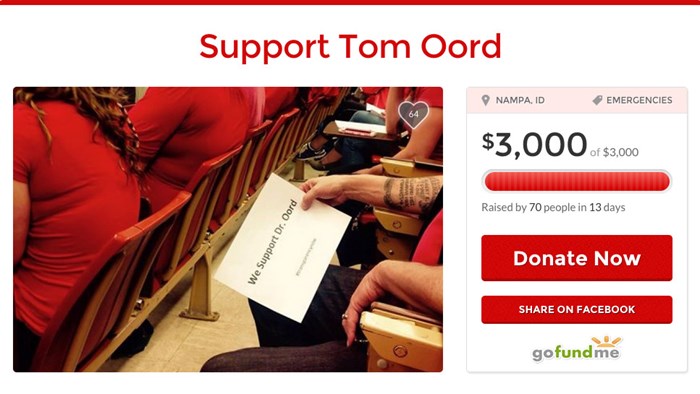 Update (Apr. 22): Theology professor Tom Oord’s termination has been placed on hold, and he will be allowed to teach his summer classes at Northwest Nazarene University (NNU).

President David Alexander apologized in an email to faculty on Saturday, three days after 77 percent of them voted that they had no confidence in him.

“The past few days have been a wash of emotions, reflections, regrets and prayers,” he wrote. “Amidst all this, the most important thing I need to say is I’m sorry.”

When the faculty spoke through their “no confidence” vote, they voiced their frustration with my leadership style. The vote was an accumulation of missed opportunities for engagement and the collegial respect that grows from times where people work together for the common good. It grieves me greatly that people have felt marginalized and professionally underutilized. It crushes my spirit that because of my actions people may presently feel less able to engage and creatively accomplish the things they hope to accomplish in their programs and across the campus.

Layers of frustration have built up. I have not adequately fostered a genuine, culture of collaboration across the faculty with the administration. For that I humbly apologize.

“I confess, I will have to break old habits,” he told them. “You know I’m a hard charger.”

Additionally, allow me to address the Trustee Resolution forming the Review Team focused on the Administrative Action of March 31, 2015. I encouraged and support this review, both its cross section of membership and the additional external oversight. I hope it allows us to gain a clear sense of what was intended and how to proceed. So that the Review can move forward without unnecessary distraction or pressure, I am placing all layoffs on hold and affected faculty members may teach summer classes as planned.

Update (Apr. 13): The president of a Christian college in Idaho has apologized for the way a popular faculty member was fired.

President David Alexander of Northwest Nazarene University (NNU) sent a letter to the campus over the weekend, defending the decision to lay off tenured theology professor Thomas Jay Oord. Alexander said budget cuts necessitated the move. A professor in the school’s counseling department was also affected by the layoffs.

Oord was notified of his firing by email while on break, which Alexander said lacked compassion.

“I want to publicly apologize to Dr. Tom Oord for the way in which he learned of the change,” said Alexander in his email. “Discussions occurred via mail and email due to spring break and the March 31st notification deadline. That was not respectful of Dr. Oord and his many contributions to the university."

Alexander had previously clashed with Oord, who supports evolution and open theology, over matters of belief.

Supporters of Oord argue that the professor was targeted for his beliefs and teaching. They point to record attendance at NNU and the school’s overall financial health, which had been touted by the administration.

In his email, Alexander said the school supports academic freedom.

“I want to state unequivocally that no individual in this process was targeted for academic or theological reasons,” he said. “Any statements that would suggest this are irresponsible and inappropriate. We continue to value and respect academic freedom and the value of tenure.”

Officers of the NNU faculty senate sent an open letter to Alexander criticizing the layoffs, which they say were made without consulting the faculty. They claim that Alexander violated the Christian ethics and policies of the college.

The faculty asked President Alexander to reverse his decision. They also offered to help make budget cuts to meet the school’s financial goals.

“We resolve to collaboratively work with the President, the President’s Cabinet, and the academic administration to address these breaches of policy and process,” the letter reads. “We resolve to assist the President and the administration in achieving the Board’s directives with regard to the budget and financial outlay that include increasing reserves, reducing spending, increasing student enrollment, and prioritizing programs without the elimination of positions in graduate counseling and religion.”

A dispute over the firing of a popular Christian college professor has gone viral.

Theology professor Thomas Jay Oord, who has taught at Northwest Nazarene University (NNU) in Idaho, for over a decade, was laid off at the end of last month.

The professor's firing, supporters say, is the latest example of the Nazarene Church’s ongoing debate over evolution.

Oord’s firing is part of a “low-level civil war” that often “plays itself out in hostilities between Nazarene pastors and college presidents,” said Karl Giberson, who formerly taught at Eastern Nazarene College and is the author of Saving Darwin: How to be a Christian and Believe in Evolution.

“The denomination has long had tension between the leadership, publishing houses, and college academics, and for the most part, the laity, who tend to be from a rural, less-educated demographic,” he told CT.

In 2000, Darryl Falk, the founder of BioLogos and then-Point Loma Nazarene University dean, was accused by pastors, parents, and alum James Dobson of “destroying the faith of [his] students,” the biologist told CT in 2012.

In 2009, biologist Richard Colling resigned from Olivet Nazarene University amid controversy over Random Designer, his 2004 book which was banned from Olivet classrooms for arguing that God is behind evolution.

In an email to CT, NNU maintained that declining enrollment was behind the loss of Oord’s job:

While experiencing growth in overall enrollment this year, Northwest Nazarene University has experienced a steady decline in graduate student enrollment over several years in two departments: theology and counseling.

NNU is strategically positioning itself to be responsive to student demand.

The University is laying-off two faculty and four staff members. The graduate faculty in the departments of theology and counseling will be directly affected. The University made these decisions unrelated to employee performance.

NNU is repositioning resources to meet increases in student demand (enrollment). These redeployments include expanding online courses and allied health offerings with the creation of a Family Nurse Practitioner program in 2016.

Randy Craker, chairman of the NNU board, defended the recent layoffs and NNU president David Alexander in an email to the campus, which was posted online by Oord supporters.

“We are in a place where decisions have been made, policy has been followed, and now we must find ways to live into the new reality,” Cracker wrote. "Those steps must be taken by all. I commit to work with our president and the board to ensure our future. I invite the campus community to work redemptively with us.”

The decision to lay off Oord came about a week after the school announced that the board had renewed Alexander's contract for another four years.

Kevin Timpe, an NNU theology professor and ally of Oord, said that the other faculty member affected by budget moves will likely be transferred to another department.

Timpe and other Oord supporters have questioned the school's explanation, pointing to a healthy budget and a record freshman class last fall. Guidestar’s latest numbers show the school’s 2012 revenue at $55.8 million and expenses at $49.9 million. Oord himself has brought in $1.3 million to the school through grants, Timpe said.

According to Timpe, Alexander and the Nazarene Church’s local district superintendent (DS) informed Oorde last year that they would be investigating his theological beliefs.

Later, Alexander “used what the DS said in an attempt to get Dr. Tom Oord to resign,” said Timpe. After Oord and his colleagues resisted, the president backed down.

Timpe told InsideHigherEd.com that Oord’s job loss has led to fears that other tenured faculty might suffer a similar fate.

"Yesterday, I heard a 20-plus-year faculty [member] express the worry that 'our tenure is now meaningless.' Many faculty worry that similar measures could be taken against them in the future," he said.

The Nazarene Church has addressed the questions of human origins in its official documents.

The Church of the Nazarene believes in the biblical account of creation (“In the beginning God created the heavens and the earth…” Genesis 1:1). We oppose a godless interpretation of the evolutionary hypothesis. However, the church accepts as valid all scientifically verifiable discoveries in geology and other natural phenomena, for we firmly believe that God is the Creator.

That statement was updated in 2009 to read:

The Church of the Nazarene believes in the biblical account of creation (“In the beginning God created the heavens and the earth . . .”—Genesis 1:1). We oppose any godless interpretation of the origin of the universe and of humankind (Hebrews 11:3)

Supporters have started a Facebook page and a GoFundMe account in order to buy 500 red T-shirts to “blast” the campus with support for Oord. As of early Friday afternoon, the GoFundMe campaign had raised more than $1,700.

At a lecture this week, a crowded room of students—many wearing red—clapped for Oord’s when he was introduced.

“I think this is the first time I ever got up from an introduction and felt like I should cry,” Oord told the room. “That’s powerful, though. Thanks so much. It means a ton. I really do want to live a life of love.”