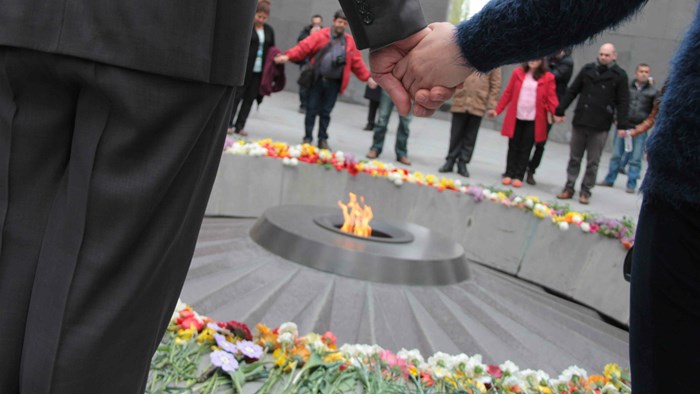 (WWM) “We came to share your pain,” Turkish Christians declared in early April, standing before TV cameras at the Armenian Genocide Memorial in Yerevan.

“We have come here to apologize for what our ancestors did, to ask for your forgiveness,” two spokesmen for the Turks went on to say.

Shocked viewers across Armenia watching the Azdarar TV news channel on April 11 could hardly believe their eyes and ears.

Turks, claiming to be Christian? And laying wreaths at the nation’s genocide memorial? How could Turks, of all people, come to Armenia to honor the memory of more than a million Armenian Christians who had been slaughtered 100 years ago by their own forefathers, the Ottoman Turks? 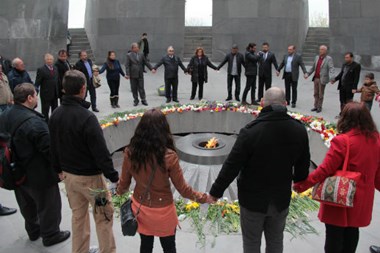 Gathered around the monument’s eternal flame, the more than twenty Turkish citizens spoke out simply, and repeatedly: “We plead with you, if you can, to forgive us and the crimes of our forefathers.”

Significantly, the Turks were joined by a number of local Armenian Christians who formed a huge circle, holding hands together around the memorial as they prayed aloud in Turkish and Armenian for their nations and peoples.

“You wrote history here in Yerevan today,” one Armenian pastor declared. It was the first time, he thought, that prayers in Turkish and Armenian had ever been voiced together before the somber memorial.

The Turkish Christians’ April visit to Armenia was the latest step in an unprecedented reconciliation initiative between Turkish Protestants and Armenian evangelicals during the past year.

Organized informally by several Turkish pastors from Muslim backgrounds, the gatherings first began with diaspora Armenians in California and New Jersey, followed by an Istanbul weekend between some 90 Turkish and Armenian participants.

For the past 100 years, Turks and Armenians have remained outspoken enemies. Their historic enmity rooted in the Armenian genocide of 1915 is both political and ethnic, but also religious. Early in the fourth century, the Kingdom of Armenia was the first nation to adopt Christianity as its state religion. But the rulers of the crumbling Ottoman Empire which carried out the genocide were Muslim Turks.

In today’s Turkey and Armenia, strong nationalist elements in the current political climate are so prevalent that the Turkish and Armenian Christians who spoke to World Watch Monitor (WWM) about their reconciliation gatherings requested strict anonymity for their own protection.

An estimated 2 million Armenians had been living in central Anatolia and the eastern regions of what is now modern-day Turkey for two millennia. But after the Ottoman regime-ordered massacres and forced deportations began in April 2015, within two years up to 1.5 million had died. The survivors had either been forcibly converted to Islam or managed to escape into the Syrian desert.

“This page in history is really painful for every Armenian,” a church leader from Yerevan who met with the Turkish Christians told WWM. “You can hardly find an Armenian whose relatives were not victims of the genocide. For this very reason, Armenians live with hatred and bitterness in their hearts.”

A Kurdish pastor who went to Yerevan said he discovered this reality for himself. “There is a huge pain, and it needs to be softened to find healing, to stop the hatred,” he told WWM. “Armenians take their children to the memorial in Yerevan, but instead of healing, it stirs their hatred. It’s in their hearts, and they cannot forget. Our fathers harmed them, and they are angry. Even in very small details, their trauma continues. If this is not stopped by healing, it will get worse.”

But he stressed that the solution was a spiritual one, which had to be built around honest, personal relationships. “We went as individuals. We didn’t go in the name of our churches. To meet face to face, in person, to hear from these Armenian brothers and sisters and pray with them was healing for both sides. The seeds of reconciliation have been planted, to grow and spread.”

“This has all developed personally, through the Holy Spirit’s orchestration in our hearts,” one Turkish pastor told WWM. “Politics can’t resolve this,” another said. “The United Nations has tried, so has the United States, to restore relations between Armenians and Turks. But they couldn’t reconcile us.”

“Politicians are stuck in the quagmire of pride, politics and getting votes,” another Turkish church leader said. But recently, he said, “Church leaders of both peoples are seeing that we must take the steps of following Jesus, in humility and forgiveness, to see reconciliation and overcome this century of pain.”

“We have all been waiting for someone to make the first step,” one Turkish pastor told WWM after returning from Yerevan. “But the first step against hatred must come from us Turks. When we made that first step, the Armenians accepted it. They are ready.”

“It was a bold step,” one Armenian evangelical said, and particularly significant for him because it had been initiated by the Turks.

“Until now,” another confessed, “we forgave with our mouths, but not with our hearts.”

For the first time, many Armenian Christians said they now realized how painful it is for the 5,000 ethnic Turks and Kurds who have converted to Christianity in Turkey in the past few decades to face the truth about the Armenian genocide.

Like other Turkish citizens, they were angered by the revenge murders perpetrated by Armenian ASALA assassins, who killed some 40 Turkish diplomats and officials during the 1970s and 1980s, allegedly “to avenge the Armenian genocide.” But this violence only stiffened Turkey’s resolve to continue to deny the Armenian genocide, deepening the society’s resentment against Armenians as a people.

“When we Armenians saw that the Turks felt pain for what their grandfathers did, we understood that we must forgive them,” one participant said. It took meeting Turkish Christians in person, one admitted, to be convinced “it is a fault for us to nurture hatred to our children.”

Some of their most moving experiences in Yerevan, the Turkish Christians told WWM, came through casual interactions on the street with complete strangers who heard them speaking Turkish.

Several men happened one evening on a restaurant selling lahmajun, a small thin pizza common in both Armenia and Turkey. After they ordered a meal in English, they sat down speaking Turkish among themselves. A middle-aged man nearby reacted angrily, asking in Turkish, “Are you Turks? What are you doing here in Armenia? May God save us!” When they explained why they had come, he retorted skeptically with a Turkish proverb, “Bir cicek’ten bahar olmaz!” [One flower doesn’t bring the spring]. Then he quizzed them about their faith, dubious that Turks could in fact really be Christians.

“He softened a little, when we explained that we had been forgiven by God,” a pastor said. “We told him, ‘Our people have sinned. Can’t you forgive us? God has.’”

The man then said his family was originally from Gaziantep, in eastern Turkey. “I taught my children not to love or even like Turks,” he said. “I never thought until now that such a thing could ever happen, for Turks to become Christians. This has changed something in my heart.”

In another encounter, a shop salesman in a souvenir market reacted harshly when he heard his visitors were from Turkey. “We have come here on the centennial of the genocide,” one pastor explained, “to share your pain. We want to tell you we are sorry for what happened, and beg your forgiveness.” The man’s expression changed, his eyes filling with tears as he shook their hands and embraced them, one by one.

One Western observer of the Yerevan gathering confessed, “I may never see something like this ever again in my life. I was a spectator, watching the walls of division and hostility come down. It’s what the gospel of Christ should be doing all over the world, bringing true reconciliation.”

Asked what the reconciliation effort has really accomplished, one Turkish pastor said simply: “We want our fellow citizens, Turks and Armenians alike, to ask us: ‘What kind of God can bring two enemies together like this?’”