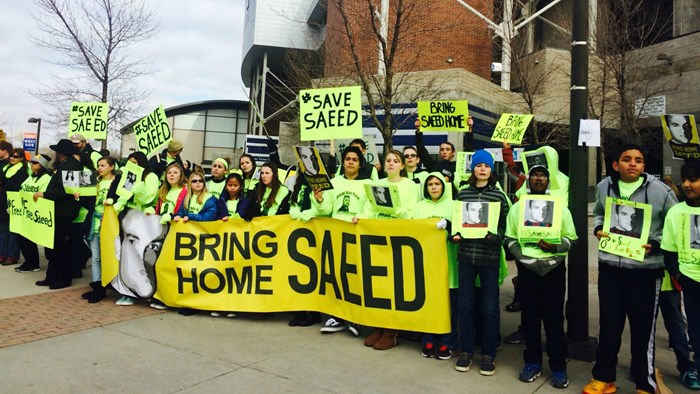 Update (Mar. 20): Despite asking the President of the United States in person to "please bring daddy home for my birthday," Jacob Abedini turned seven years old on Tuesday (Mar. 17) without his father, Saeed Abedini. But President Obama marked the Iranian New Year today by demanding that Iran's government "immediately release" the imprisoned pastor and two other Americans.

"Saeed Abedini of Boise, Idaho has spent two and a half years detained in Iran on charges related to his religious beliefs," said Obama. "He must be returned to his wife and two young children, who needlessly continue to grow up without their father."

At this time of renewal, compassion, and understanding, I reiterate my commitment to bringing our citizens home and call on the Government of the Islamic Republic of Iran to immediately release Saeed Abedini, Amir Hekmati and Jason Rezaian and to work cooperatively with us to find Robert Levinson so that they all can be safely reunited with their families as soon as possible.

"Iran often, as part of its celebration of the new year, gives a reprieve or even frees some prisoners," noted Jay Sekulow of the American Center for Law and Justice, which advocates for Abedini and his family. "We urge the Obama Administration, as it literally sits across the negotiating table from Iran, to do all within its power to bring Pastor Saeed home. No American should be left behind to suffer unjustly in an Iranian prison simply because of his Christian faith."

In a birthday letter from prison, Abedini told his son, "I long to be there for your birthday and to make this reunion happen, but my chains are keeping me from you." He wrote:

I want you to know that although I might NOT BE THERE and you might feel my absence, there is One who always IS. One who is always there with you and who can meet all of your needs under any condition. I might not be there on your birthday and that breaks my heart as your father. But I know the One who is there on your birthday who is there for you and cares for you more than anyone could imagine. HE IS THERE with you and His name is I AM WHO I AM.

At a recent Senate hearing, the US ambassador at large for international religious freedom, David Saperstein, expressed the American government's commitment to bringing Abedini back to the United States.

Hours after giving his seventh State of the Union address, President Barack Obama met in person with Naghmeh Abedini, an Idaho mother who has spent more than two years advocating for the freedom of her husband, Iranian-American pastor Saeed Abedini, jailed in Iran.

More than 100,000 people had signed a petition, sponsored by the American Center for Law and Justice (ACLJ), asking the President to let Naghmeh make a “personal appeal for her husband” during his visit today to Boise, Idaho. Obama met privately with her and her two children for about 10 minutes.

“I am extremely thankful the President took the time to meet with our family and told us that securing the release of my husband is a top priority,” said Naghmeh Abedini, according to an ACLJ statement. “The President was focused and gracious—showing concern to me and my children. I know that this meeting could not have occurred without prayer, and I am grateful to the many people around the country and world who continue to pray for Saeed’s release.

"The President repeated his desire to do all that he can to bring Saeed home. That means the world to me and my children and has given me a renewed sense of hope,” she said.

According to the ACLJ [full statement below]:

Naghmeh told the President that her son, Jacob, had something to ask him. Jacob asked: "Mr. President, can you please bring daddy home for my birthday?" The President responded, "When is your birthday?" Jacob told him March 17th, when he will turn seven. The President said he will try very hard to bring his father home.

After hearing last Friday that Obama would be traveling to Boise, where Naghmeh lives with the couple’s two children, she requested a meeting. “Such a meeting would go a long way in instilling faith that the leader of our country considers our sufferings important and that you are committed to reuniting our family,” Naghmeh wrote to Obama. The President had previously expressed concern for Saeed’s fate during a 2013 phone call with Hassan Rouhani, leader of Iran.

Since Saeed was first imprisoned in 2012, his release has also been requested by Billy Graham, Secretary of State John Kerry, and the United Nations. CT noted how efforts to "Save Saeed" were growing more numerous—and more interesting.

A convert from Islam to Christianity, Saeed made frequent trips to Iran and had been warned by the Muslim nation against his involvement with house churches; instead, he had returned to continue building a government-approved orphanage. While there, Saeed was pulled off a bus, charged with undermining national security, and sentenced to eight years in prison, which has resulted in torture and beatings as well as pressure to recant.

“Pastor Saeed has become the face of the persecuted Christian church worldwide, one of many Christians around the world who face imprisonment, beatings and even death for their faith,” said Jordan Sekulow, ACLJ's executive director.

Abedini is only one of at least 60 Christians in Iran—which contains between 200,000 and 750,000 Christians—currently in prison, according to Middle East Concern (MEC). Their plight was named one of the top 10 persecution stories of 2014 by Morning Star News.

In August, a pastor in the Church of Iran denomination was charged with “enmity against God,” which can carry the death sentence. He and two other Church of Iran leaders were also charged with "spreading corruption on Earth," which also carries the death sentence. Weeks later, the charges were downgraded to "action against national security" and "creating a network to overthrow the System.” Last month, after two of the men were acquitted, charges were dropped against the third. All the men have been released.

Open Doors International ranked Iran seventh in its 2015 watch list of countries where it’s hardest to be a Christian.

CT noted how the two-year anniversary of Abedini's imprisonment (marked by 460 prayer vigils) coincided with good news for Persian Christians at large.

CT's previous coverage of Iran includes how it is one of the world’s hardest countries in which to be a Christian, but also one with excellent evangelists and a record number of baptisms. CT covered house pastor Yousef Nadarkhani’s imprisonment and release, and talked with Maryam Rostampour and Marziyeh Amirizadeh after they spent eight months in Iran’s most notorious prison for their faith.

ACLJ: PRESIDENT OBAMA TELLS WIFE OF AMERICAN PASTOR IMPRISONED IN IRAN THAT SECURING HIS RELEASE IS “A TOP PRIORITY”

President Obama met with Naghmeh and her two young children, 6-year-old Jacob and 8-year-old Rebekka during a stop in the Abedini’s hometown of Boise, Idaho.

“I am extremely thankful the President took the time to meet with our family and told us that securing the release of my husband is a top priority,” said Naghmeh Abedini. “The President was focused and gracious – showing concern to me and my children. I know that this meeting could not have occurred without prayer and I am grateful to the many people around the country and world who continue to pray for Saeed’s release. The President repeated his desire to do all that he can to bring Saeed home. That means the world to me and my children and has given me a renewed sense of hope.”

The private meeting, which lasted about ten minutes, occurred in an office at Boise State University, just moments before the President addressed an audience about education.

“We're grateful that President Obama took the time to meet with Naghmeh and speak with her and the children,” said Jordan Sekulow, Executive Director of the ACLJ, which represents Naghmeh and her two children. “Pastor Saeed has been wrongly imprisoned for nearly two and a half years. He has been separated from his wife and children. The pain experienced by the Abedini family is impossible to imagine. The meeting between President Obama and the Abedini family is a very welcomed development. It demonstrates the President's concern and compassion for this family. It also underscores the importance of Pastor Saeed's case, a U.S. citizen imprisoned in Iran merely because of his Christian faith. The face-to-face meeting elevates Pastor Saeed's plight on the world stage - and should send a powerful message to the Iranians - it is time to release Pastor Saeed so he can return home to his family.”

Naghmeh told the President that she prays for him often. The President smiled when Naghmeh told him that she had refrained from food and had fasted for days praying that God would grant this meeting with him - and that the meeting itself was the result of that prayer.

Naghmeh told the President that she knows that he cares about families and that the face-to-face meeting with the President reflected the care and concern he has for the Abedini family.

Naghmeh told the President that her son, Jacob, had something to ask him. Jacob asked: "Mr. President, can you please bring daddy home for my birthday?" The President responded, "When is your birthday?" Jacob told him March 17th, when he will turn seven. The President said he will try very hard to bring his father home.

The meeting between the President and the Abedinis occurred after more than 100,000 people signed on to an ACLJ letter urging President Obama to meet with the family. Pastor Saeed’s two young children – Jacob and Rebekka – have recorded a personal plea asking President Obama to bring their father home. That video is available here.

The ACLJ continues to work in this country and abroad to secure the safety and freedom of Pastor Saeed, a U.S. citizen who has been imprisoned in Iran for nearly two and a half years merely because of his Christian faith.