Majority of presbyteries vote to no longer limit marriage to a man and a woman.
Morgan Lee|March 18, 2015 04:03 PM 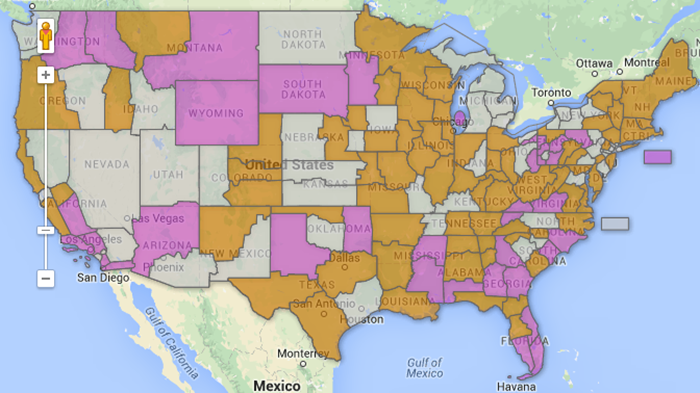 The Presbyterian Church (USA) will now define marriage as a "unique commitment between two people," rather than a lifelong covenant between a man and a woman as an act of Christian discipleship.

Last June, the PC(USA) general assembly voted to change the language in its Book of Order, the denomination’s governing constitution. Following the vote, a majority of the PC(USA)’s 171 presbyteries also had to approve the measure for it to go into effect. On Tuesday, this number (86) was reached.

“In terms of the PCUSA’s witness to the world, this vote demonstrates a complete accommodation to the prevailing winds of our culture,” said Carmen Fowler LaBerge, PLC president, in a statement. “Any prophetic voice that the denomination may have once had to speak truth and call people to repentance is now lost."

The Book of Order's new definition of marriage reads:

Marriage is a gift God has given to all humankind for the well-being of the entire human family. Marriage involves a unique commitment between two people, traditionally a man and a woman, to love and support each other for the rest of their lives. The sacrificial love that unites the couple sustains them as faithful and responsible members of the church and the wider community.

The same paragraph in the old definition reads:

The amendment provides an exemption for PC(USA) teaching elders who believe that officiating a same-sex marriage would violate their “discernment of the Holy Spirit and their understanding of the Word of God.” Local congregations can also deny the use of church property for same-sex ceremonies.

LaBerge also noted the effects of the departure of conservative churches with large votes at presbytery meetings and a significant number of small member churches.

"We’re going to continue to see diminished vote totals and swings in presbyteries where the constituency is now almost exclusively progressive because so many conservatives have left," she said in a statement.

In a letter to churches, PC(USA) leaders said they hope the vote would not end the denomination’s conversation about marriage and family. “We hope that such ‘up/down’ voting does not mark the end, but the continuation of our desire to live in community; a partnership that requires prayer, the study of Scripture, listening to and with one another, and a dedication to partnership in the midst of our diversity of opinion,” said Heath K. Rada and the Rev. Larissa Kwong Abazia, the moderator and vice-moderator of the General Assembly.

The PC(USA) has 1.7 million members but has lost more than 25 percent of its membership in recent decades. In 2013, membership declined by 5 percent as 148 congregations left for other denominations—the largest annual membership loss in nearly 50 years.

Today the denomination is the 10th largest in the US. Its almost 2 million members are dwarfed by Southern Baptists, the largest US Protestant denomination with nearly 16 million members. The Mormon church and Assemblies of God denominations also have higher membership numbers than the PC(USA).

In 2012, conservative Presbyterians launched the Evangelical Covenant Order of Presbyterians (ECO), saying the PC(USA) was "too consumed by internal conflicts and bureaucracy to nurture healthy congregations."

CT has reported on membership drops in the PC(USA), including the decision of John Ortberg's church to leave for the ECO, renewal group strategies, and other stories about Presbyterians.