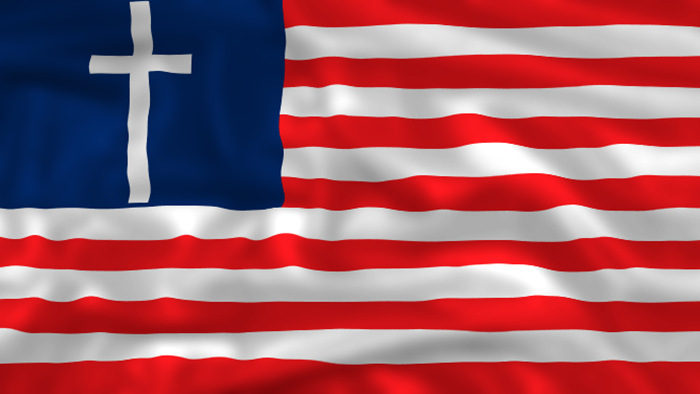 The main methods for measuring American faith are flawed.

So thinks the Pew Research Center, which today released the second wave of a massive study designed to “fill the gap” left by the United States census (no questions on religion), the self-reporting of denominations (“widely differing criteria”), and smaller surveys (too few questions or people).

Scrutinizing the past seven years, Pew finds that, amid the rise of the “nones” and other popular talking points, the fate of evangelicals is proving much brighter than Christianity at large.

Here are highlights from the US Religious Landscape Study, conducted among more than 35,000 adults in English and Spanish, of how American religion has changed from 2007 to 2014:

Over the past seven years, evangelicals have lost less than 1 percent of their share of the population, holding steady at about 1 in 4 American adults (25.4% in 2014, vs. 26.3% in 2007) and preserving their status as the nation’s largest religious group. 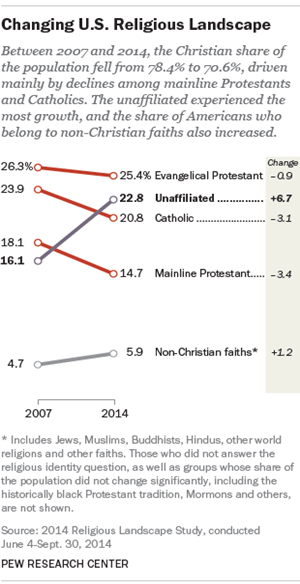 The declines have allowed the religiously unaffiliated, who gained nearly 7 percent in population share, to surge past Catholics and mainline Protestants to become America’s second-largest religious group (22.8% of adults). (Historically black Protestant denominations, tracked separately though nearly three-quarters of their members identify as evangelicals, were statistically unchanged.)

The population share of evangelicals rises even higher when identified differently.

For the above findings, Pew categorized Americans by denominational affiliation. (Evangelical denominations include the Southern Baptist Convention, the Assemblies of God, Churches of Christ, the Lutheran Church-Missouri Synod, the Presbyterian Church in America, and nondenominational churches.) But Pew also asked: “Would you describe yourself as a born-again or evangelical Christian, or not?”

2) The label “evangelical” is more popular among all Christian groups 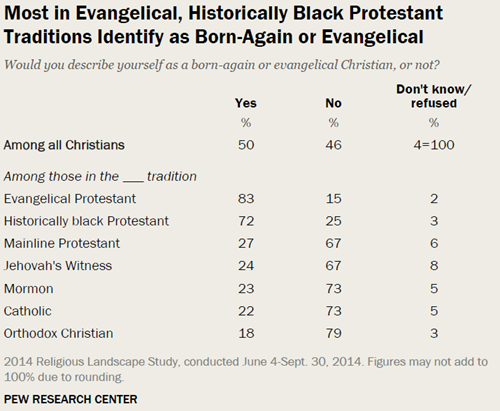 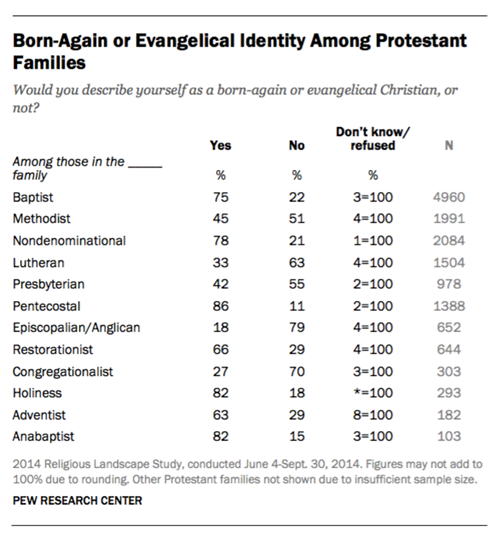 3) Evangelicals convert many and retain their kids

Pew found a "remarkable degree of churn" in the US religious landscape. But evangelicals are the “major exception” to the national pattern of Christian decline, and the only major Christian group in the survey that has gained more members than it has lost through religious switching.

Over the past seven years, evangelicals lost almost 8.5 percent of adherents and gained almost 10 percent for a net gain of 1.5 percent since 2007.

Overall, Pew found that "there are more than four former Christians for every convert to Christianity." 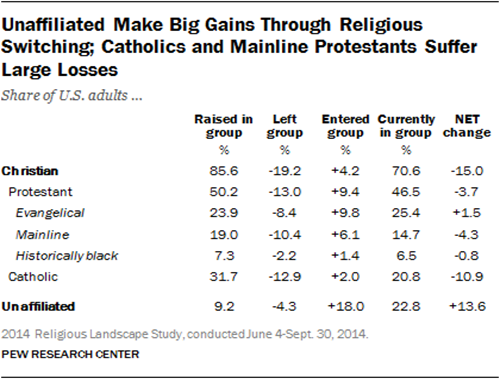 Evangelicals retain two-thirds of their children, placing fifth among all religious groups and second among Christian groups. By comparison, Protestants at large retain less than half of their children.

Of the third of those raised as evangelicals who leave the tradition, most switch to no religion at all (15%) or a mainline Protestant church (12%). Only 2 percent become Catholics. 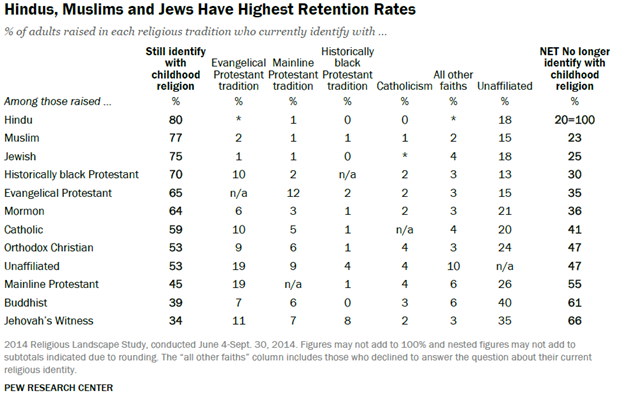 Overall, about half of Americans raised as Protestants remain in their childhood denominational family (47%). About one-quarter now identify with a different Protestant group (27%), while 3 percent became Catholic, 4 percent became non-Christians, and 19 percent became unaffiliated. 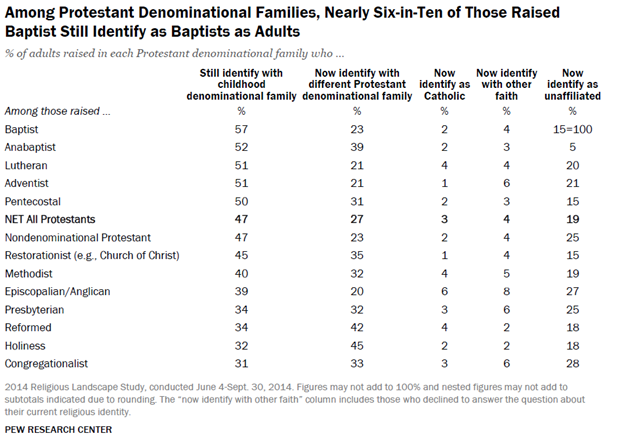 The only group to gain more than evangelicals from religious switching were the unaffiliated, gaining 18 percent (nearly double the evangelical rate) for a ratio of 4.2 people gained for every 1 person lost. Most current "nones" were raised as Catholics (28%), mainliners (21%), or unaffiliated (21%), while 16 percent were raised as evangelicals.

However, the unaffiliated have "one of the lower retention rates among religious traditions," losing nearly half of their children: 9.2% of Americans were raised unaffiliated, while 4.3% of Americans left the group and affiliated with a religion by 2014. Those who found religion were most likely to become Jehovah’s Witnesses (12%), with the rest evenly spread among other religions: Buddhists (8%), Mormons (8%), evangelicals (7%), mainliners (6%), black Protestants (6%), Muslims (6%), Jews (6%), and Orthodox (5%).

Overall, more than 4 out of 10 adults (42%) now have a different religion than they did as children, if switching between mainline, evangelical and historically black Protestant denominations is included. If Protestants are lumped together, then fully one-third of adults (34%) have crossed between religions since childhood, up from 28% in 2007. That means a quarter of all Americans who switched their religion moved within Protestantism.

Pew's study was unable to estimate the number of "reverts," or "people who leave their childhood religion before returning to it later in life." 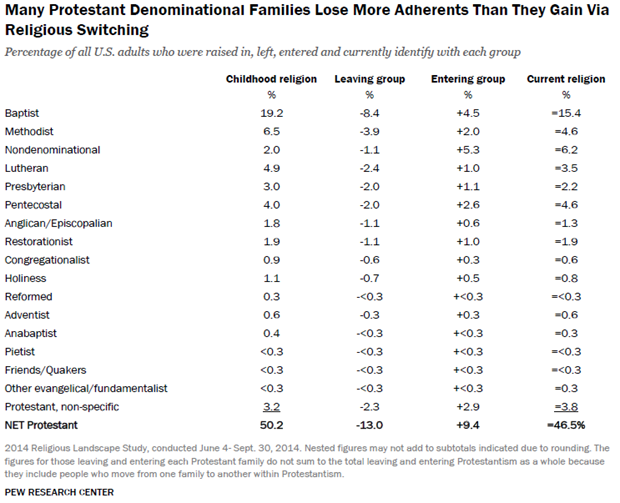 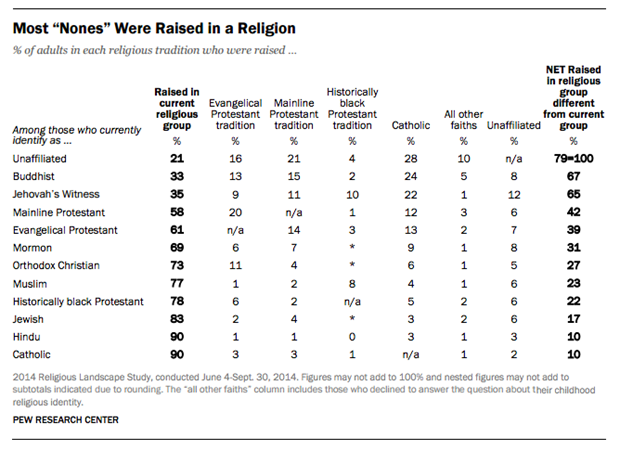 Today, more than one-third of US adults who identify as born-again or evangelical Protestants, regardless of denomination, are non-white. 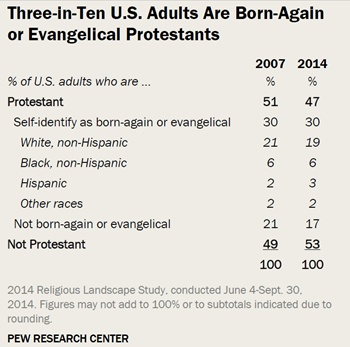 Today, 19 percent of Hispanics identify as evangelicals, as do 14 percent of blacks and 23 percent of other minorities.

Among evangelicals, Asians are the youngest (34% are ages 18 to 29), followed by Latinos and blacks.

5) Who evangelicals marry and how many kids they have

Three-quarters of evangelicals marry coreligionists, more than historically black Protestants (65%), mainline Protestants (59%), and the unaffiliated (56%). This may account for some of the steady evangelical numbers, as married people tend “to be more religiously active than unmarried people,” Pew reports. “Both groups – those who are married and those who are not – have grown less religiously affiliated in recent years, though married people have done so more slowly.” (The study only examined marriages that were still intact.)

Seven percent of evangelicals have a mainline or unaffiliated spouse, while six percent have a Catholic spouse.

The birth rate for evangelical adults in 2014 was 2.3 children, the same rate as Catholics. Only two groups produce more children: those in the historically black tradition (2.5%) and Mormons (3.4%). The national average was 2.1 percent. 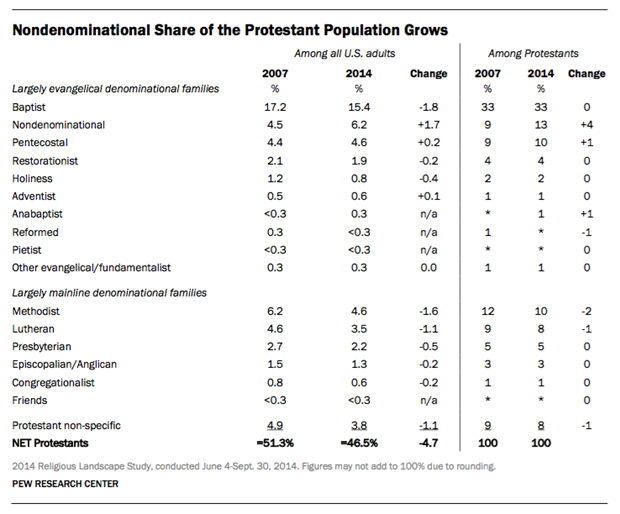 CT covers many Pew reports, including the best prediction yet of how Christianity and Islam will look in 2050, and how scores of Catholics in Latin America are converting to Protestantism.