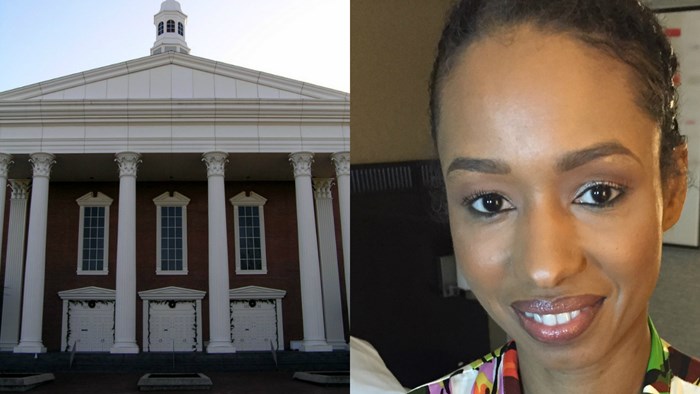 Update (Feb. 6): Almost 80 current faculty members at Wheaton College have jointly asked the Illinois school to drop its attempt to fire Larycia Hawkins and restore her to the classroom instead.

The college has about 200 full-time faculty. Some posed with signs supporting their colleague. Alumni expressed mixed reactions in the comments section of the student newspaper's exclusive post.

The Record also published an interview with Hawkins in which she explains, among other topics, her vision of a win-win scenario: reconciliation between herself and the college.

Update (Feb. 4): A Wheaton faculty committee focused on diversity has raised concerns that Larycia Hawkins—the college's first black, female, tenured professor—has been treated in a discriminatory manner, according to an internal memo leaked to Time magazine.

“We believe that the college has demonstrated a pattern of differential over-scrutiny about Dr. Hawkins’s beliefs in ways often tied to race, gender, and marital status,” states the advisory memo, according to Time. “This pattern of over-scrutiny precipitated missteps and discriminatory differential treatment of Dr. Hawkins in the present proceedings.”

Wheaton has made “demonstrable and admirable efforts” to promote diversity, wrote the six-person diversity committee. But despite the college’s good intentions, “discrimination can and does occur even when people of goodwill don’t intend it.”

The college confirmed the authenticity of the memo.

"This advisory memo was given confidentially to the Faculty Personnel Committee to be considered by the FPC in accordance with relevant policies," stated Wheaton on its website. "The Diversity Committee expresses its concern regarding the disclosure of this private memo, which was intended as additional information for the Faculty Personnel Committee, rather than a public document."

Hawkins told CT the report “raises significant issues in myriad areas of diversity that all academic institutions need to address in a substantive fashion."

"As a female and minority professor, I know that my views have been solicited by the administration in its quest for greater diversity," she stated. "As an underrepresented voice at Wheaton, I’m asked to speak into a lot of different situations on a lot of different kinds of topics, and I do that willingly. I welcome those queries, and I see that as part of my institutional service. What that does is it puts me in the position of being a lightning rod on campus surrounding the most controversial issues.

"Much of the time, the administration is asking me to speak into these issues. I grew up in the black church tradition, and in the black church tradition, we talk about speaking truth to power in a prophetic voice. Power doesn’t always want to hear the things we have to say," stated Hawkins. "As someone who’s an outsider to evangelical institutions—I didn’t go to a Christian college, I went to Rice University—I think that sometimes the outside voices at Wheaton College are seen as too shrill or a clanging gong as opposed to being said in love."

A group of 20 Wheaton alumni who are now political scientists (like Hawkins) also raised concerns about discrimination earlier this week.

Removing Hawkins’s tenure may also hamper Wheaton’s ability to attract "first-rate professors” and the ability of its graduates to find jobs, claimed the alumni letter.

In its first statement on its suspension of Hawkins, Wheaton stated, “Contrary to some media reports, social media activity and subsequent public perception, Dr. Hawkins’ administrative leave resulted from theological statements that seemed inconsistent with Wheaton College’s doctrinal convictions, and is in no way related to her race, gender or commitment to wear a hijab during Advent.”

This week, some Wheaton students and alumni embarked on a hunger fast until after the FPC hearing, scheduled for February 11, for the purpose of "lament, reconciliation, and shalom."

Update (Jan. 22): At a public listening session yesterday, Wheaton provost Stanton Jones presented his own answer to the question that started the current controversy: Do Christians and Muslims worship the same God?

"Ontologically all monotheists affirm that there can only be one divine being, and it seems logical to me that there must be some referential overlap or similarity in the divine being that each is referring to in each of the monotheistic religions," said Jones, according to a transcript posted by The Wheaton Record. "We can have more wide ranging discussions about the complexities of these matters in this community as long as we remain adaptable and responsive in working out our core theological commitments in these discussions in a manner that is sensitive to our various audiences."

Jones clarified that he was "just speaking for myself." The college previously addressed the question on its FAQ (among other statements), noting:

While Islam and Christianity are both monotheistic, we believe there are fundamental differences between the two faiths, including what they teach about God’s revelation to humanity, the nature of God, the path to salvation, and the life of prayer.

Jones also explained why confessional statements must be a "living breathing instrument interpreted wisely and responsibly in the context of a community," and that "contradiction of, or conflict with a confessional statement has to be more than just the explicit denial of some explicit aspect of that statement." The student newspaper's editor in chief, Kirkland An, live-tweeted other quotes from the session.

Wheaton College’s faculty council has unanimously asked the Illinois school’s administration to withdraw its recommendation that Larycia Hawkins have her tenure and employment terminated.

Hawkins, an associate professor of political science, told CT she felt “strengthened” by the decision. Wheaton told CT the college “respects the viewpoints” of the council, but plans for a hearing (as spelled out in the faculty handbook) will continue.

Wheaton faculty were informed of the council's vote yesterday. “Following recent discussions between faculty council, President [Philip] Ryken and Provost [Stanton] Jones, [we] unanimously recommended to administration that the administrative leave and the notification of termination ‘for cause’ of Dr. Larycia Hawkins be withdrawn due to grave concerns about the process,” wrote New Testament professor Lynn Cohick on behalf of the council.

The Faculty Council is distinct from the Faculty Personnel Committee (FPC), the body in front of which Hawkins and the administration will make their cases at a February hearing. (The chair of the FPC abstained from the council's vote.)

In its email, the council listed five questions that faculty intend to ask administrators during a listening session this afternoon:

Does the College have a position on what can or cannot be said regarding the question: “Do Christians and Muslims worship the same God?"

What is the process for determining acceptable interpretations of the Statement of Faith? Do faculty have a role in this process? How will faculty know if their views and/or statements are in danger of being judged unacceptable?

Is it considered proper process to place a faculty member on leave based on public statements that could be outside the statement of faith before there is a process of interpretation?

What is Administrative Leave, and how does the Employee Handbook relate to the Faculty Handbook in the case of disciplinary situations?

What policies are in place for administration to deal with “emergency” social media situations?

"It appears there is great clarity among the faculty that the college has abrogated their process," Hawkins told CT. "I look forward to hearing responses to the Council’s clarifying questions from President Ryken and Provost Jones."

"President Ryken and the Faculty Council have discussed a review of current policies and processes, with a view to addressing or clarifying areas of concern," Wheaton told CT. "However, Dr. Ryken has also asked Faculty Council to understand that the Faculty Personnel Committee hearing is the method through which the particulars of Dr. Hawkins’ personnel matter will be addressed."

Hawkins told CT that "for the sake of my students and colleagues, I continue to seek reconciliation with Wheaton College." In January, she asked that her supporters pray for Jones and Wheaton at large, stating that "Embodied Solidarity is not demonizing others in defense of me."

Since the semester began, students, faculty members, and alumni have become increasingly vocal over the college’s standoff with Hawkins, initially provoked by her Facebook comment that Muslims and Christians “worship the same God.”

At least 800 alumni have pledged to stop donating to the college "until full restoration and reconciliation are reached.”

On the first day of classes, some professors showed up in full academic regalia to demonstrate solidarity with their colleague, and some planned teach-ins for students. USA Today interviewed African American students at Wheaton frustrated with Hawkins’s treatment, given that she is the college’s only tenured black female professor.

Christian and Muslim theologians have a history of learning from one another in spite of their differences, said art history professor Matt Milliner.

"Jerusalem and Mecca are hundred of miles apart, both geographically and theologically, and never has anyone in this mosque expected me to be anything but straightforward about that separation," he said. "That said, if the Islamic tradition can help a Wheaton Christian philosopher do his job of proclaiming God to the modern world, then perhaps the Islamic Center of Wheaton can help Christian residents of Wheaton do that same job as well."

Christians are called to stand with their Muslim neighbors during the calm and storm, said urban studies professor Noah Toly.

“We don’t always do this, but when we don’t, Christians affirm that it is because of the righteousness of Jesus Christ that we can be delivered from our sin—and it is a sin not to stand with our neighbors,” said Toly. “When we do stand with them, we can be assured that we are promoting the shalom of our communities, that we are rebuilding our cities.”

Earlier, Toly explained his "hope for a resolution that reinstates Dr. Hawkins and initiates a transparent conversation about identity, governance, and process." Former Wheaton professor Tobin Grant raised six questions about Wheaton's discipline of Hawkins, including whether the college is "adding new, unwritten faith requirements" and where the "burden of proof" should lie.

“[Professors] can think aloud in the classroom about the meaning of life and the nature of the human condition without worrying about being accused of violating the separation of church and state or transgressing the taboo against allowing spiritual reflections to wander into a conversation about death or ethics or hope,” he wrote.

History professor Tracy McKenzie wrote that he "had experienced much greater academic freedom at Wheaton than I ever did at the secular university that I left."

Alan Jacobs parses the academic freedom debate. The president of Wheaton College in Massachusetts laments the loss of civility in today's disagreements.

CT has noted what evangelical experts on missions and Muslims think of the "same God" debate, as well as the views of Arab evangelical leaders. Justin Taylor has also rounded up the theologians who have weighed in so far.

CT also editorialized on how Wheaton and Hawkins should reason together.