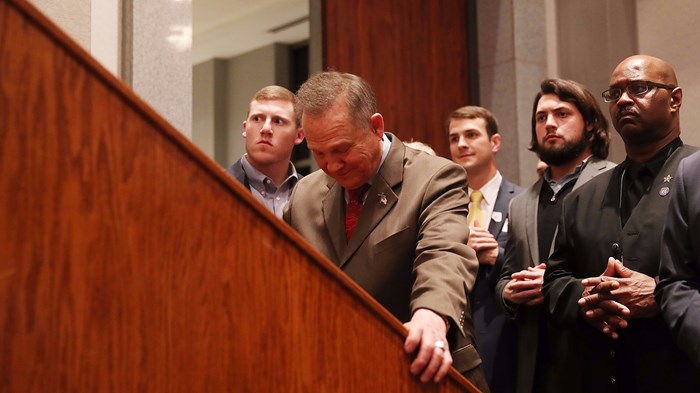 “An incredible amount of evangelical Christians said this was a bridge too far.”

This is how Albert Mohler explained to CNN, live at 1 a.m., the unexpected loss of Roy Moore to Doug Jones in Alabama’s special election for US Senate. “It’s nothing less than stunning.”

As expected, the state’s white evangelicals mostly voted for the Republican candidate—by a wide 4–1 margin (80% Moore vs. 19% Jones). However, enough of the Heart of Dixie’s pro-life contingent voted instead for the Democratic candidate—1 in 4 (26% Jones vs. 72% Moore)—to help hand the pro-choice politician the surprising victory by a narrow 1.5 percentage points.

According to exit polls, 44 percent of Alabama voters Tuesday were white born-again or evangelical Christians (self-identified). In the last two elections with state-level exit polling, 2008 and 2012, their share was 47 percent—making them “the only group showing slight signs of slippage,” according to an analysis by The Washington Post.

“[Moore] lost because so many evangelicals didn’t show up,” Mohler told CNN anchor Don Lemon. “That’s the big story … what didn’t happen. You didn’t have any major pastors or evangelical leaders [in Alabama], not a single one, willing to support Roy Moore.

About 1 in 4 white evangelicals likely to vote for Jones mainly disliked Moore, according to a Fox News poll conducted in the days before the election.

“It sends a signal to the Republican party. It also sends a signal to evangelicals,” Mohler told Lemon. He later analyzed the “political earthquake in Alabama” and what it revealed about “the limits of conservative tolerance on questions of character” on the Wednesday taping of his program, The Briefing. One of his most significant examples of shifted Republican votes: 2 out of 3 Alabama women with children under 18 voted for Jones instead of Moore. 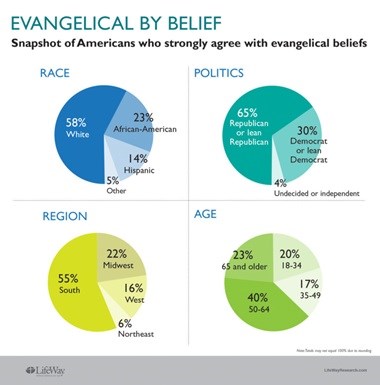 Another key factor in the outcome: African Americans showed up in large numbers—comprising 29 percent of the vote—and voted nearly unanimously for Jones (96%). (The Post also examined why.)

While the exit polls don’t publicly release breakouts for blacks by religious affiliation or church attendance, LifeWay Research recently found that black Americans are almost three times more likely than white Americans to hold evangelical beliefs (30% vs. 13%), and twice as likely to self-identify as “born again” (49% vs. 27%). (At Ed Stetzer’s CT blog, the managing director of the Billy Graham Center makes the case for “how black women saved evangelicalism.”)

Moore has yet to concede the election, suggesting that there should be a recount. (State law mandates a recount if the vote falls within half a percentage point.) Alabama’s secretary of state told CNN that while either candidate could request—and pay for—a recount, it was “highly unlikely” that the result would change.

Instead of making a concession speech to his gathered supporters late Tuesday night, Moore told them that “God is always in control,” and referred to Psalm 40:

I waited patiently for the Lord—that’s what we’ve got to do—and he inclined to me and heard my cry, and brought us up also out of the horrible pit, out of the mirey clay, and set my feet on the rock and established my goings and put a new song in our mouth, giving praise to our God. Many shall see it and hear it, and shall be moved by that, if you will.

“That’s what we’ve got to do,” said Moore. “Wait on God and let this process play out.”

In an end-of-November Washington Post-Schar School poll of registered voters in Alabama (which predicted a 78-19 white evangelical split for Moore, and was the only final poll to meet FiveThirtyEight’s “gold standard”), 77 percent of self-identified white evangelicals trusted Moore to handle the issue of abortion better than Jones. However, only 27 percent said a candidate’s position on abortion would be the most important factor in their vote, while a plurality of 31 percent said health care and 22 percent said personal moral conduct. On that front, 59 percent said Moore had higher standards of personal moral conduct, while 22 percent said Jones.

Half of Alabama voters said President Donald Trump was “not a factor” in their vote, while 26 percent said their vote was to support him and 20 percent said it was to oppose him. Overall, 48 percent of voters approve of Trump (33% strongly) while 47 percent disapprove of him (40% strongly).

On Tuesday, Politico/Morning Consult released their latest nationwide poll of registered voters, conducted December 8–11 and including a multiethnic sample of 558 self-identified evangelicals.

The survey found, among evangelicals nationwide:

For comparison, back in Alabama, the Fox News poll found that among registered white evangelical voters in the state, the most important voting factor for 46 percent was “a candidate with strong moral character,” while for 33 percent it was “a candidate who will vote the way you would vote.”

Christian evangelical Republicans are more likely to choose a representative who votes the way they want (55%) over one who lives a moral life (36%), while evangelical Democrats and independents choose the moral person (54%) over the preferred voting record (39%).

CT editorialized on how the biggest loser of the election was not Moore (or Jones), but Christian witness.