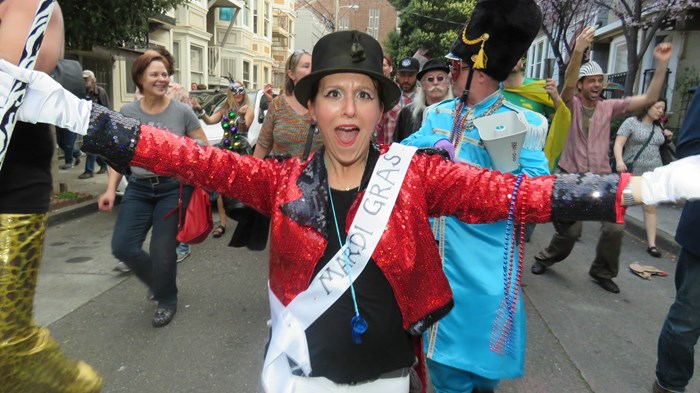 During the season of Lent, some Americans give up chocolate or alcohol. Others dump guilty pleasures like social media or binge-watching television.

But most abstain from Lent itself.

Three-quarters of Americans (76%) say they don’t typically observe Lent, according to a new survey from LifeWay Research. 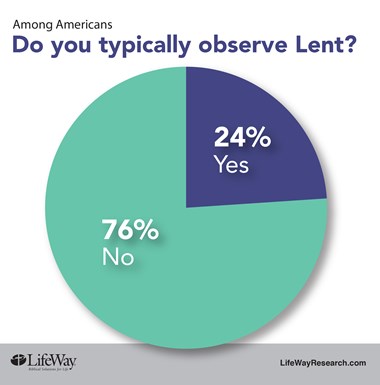 Unlike other Christian traditions like celebrating Easter or Christmas, Lent seems to lack crossover appeal, says LifeWay Research executive director Scott McConnell. It has remained a religious event, rather than one that appeals to a broader public.

That’s in part because there’s no social benefit like giving gifts or getting together with family, says McConnell.

“Lent is not about having your best life now,” McConnell says. “Those who observe it believe they are giving up things they want in order to focus on what God wants. There’s little popular appeal in that.”

Lent, which begins on Ash Wednesday—March 1 this year—and ends during Holy Week, is traditionally seen as a time of preparation for Easter. Part of that preparation often includes fasting as a form of spiritual discipline—a practice that dates back to the early church. Lent traditionally lasts for 40 days (excluding Sundays), a time frame established after the Council of Nicea in 325 A.D.

Catholics (61%) remain most likely to observe Lent, according to LifeWay’s survey. Protestants (20%) and those with evangelical beliefs (28%) are less likely.

Since Lent is primarily a practice among Catholics or mainline denominations with more liturgical traditions, its popularity among those with evangelical beliefs is surprising, McConnell said.

LifeWay asked Americans who observe Lent how they do it. 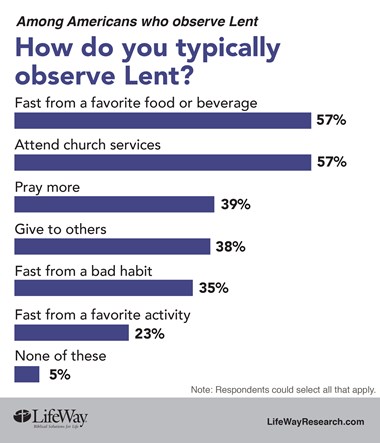 “There’s a lot more to Lent than giving things up,” says McConnell. “Americans who observe Lent also take other steps—like praying, giving, and going to church more—to practice their faith.”

LifeWay Research conducted the study Sept. 27 – Oct. 1, 2016. The survey was conducted using the web-enabled KnowledgePanel®, a probability-based panel designed to be representative of the U.S. population. Initially, participants are chosen scientifically by a random selection of telephone numbers and residential addresses. Persons in selected households are then invited by telephone or by mail to participate in the web-enabled KnowledgePanel®. For those who agree to participate, but do not already have Internet access, GfK provides at no cost a laptop and ISP connection.