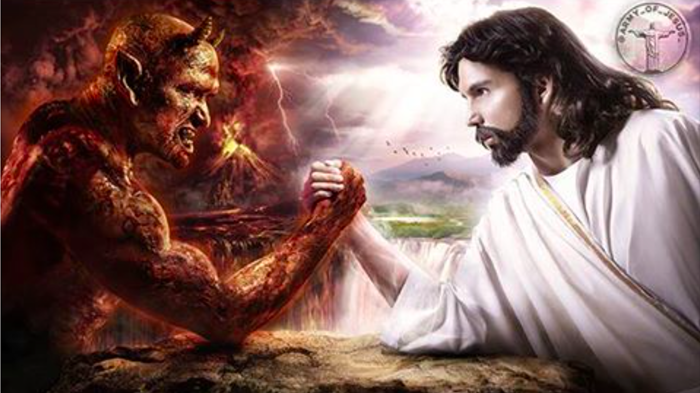 According to one post presented by Senator Mark Warner—depicting a standoff between a glowing figure of Jesus Christ and Hillary Clinton dressed as the devil—the fake Christian account had over 217,000 likes. (For comparison, that’s more Facebook likes than some established, politically conservative evangelical media outlets, such as World or Charisma magazines.)

Posts on the Army of Jesus page appealed to conservative Christians who opposed Clinton, inviting them to “like if you want Jesus to win!”

“I suspect some of this microtargeting only hardened voting preferences that pre-existed; these ads would only resonate with people who already had their minds made up,” said Kevin den Dulk, political science professor at Calvin College. “This doesn’t make the ads any less concerning. They are blasphemous, manipulative, and perhaps marginally deepened American polarization.”

The interactivity and shareability of these posts, before they were removed from Facebook for using fake identities, led to their widespread reach. Though the Russian agency also used Army of Jesus and other accounts to launch sponsored posts, a form of paid advertising, only about 11.4 million saw the ads, compared to ten times as many who saw them organically, reported The Washington Post. 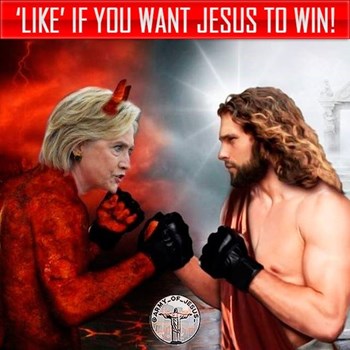 The Daily Beast, through uncovering Google archives and a related Instagram feed for the Army of Jesus page, described other images shared through the fake account:

Many, and perhaps the majority, of the images are fairly standard pieces of Christian messaging, such as a picture of people holding hands with the text, “my prayer is for all Christians to stand as one army of Jesus,” or “a bible that’s falling apart usually belongs to someone who isn’t.”

But, as Warner noted, Army of Jesus started to post much more explicitly political content. “This is another example of how people are lured in,” Warner said during the hearing.

Several posts tugged at political or theological divides. “Defend Christian faith, stop atheist propaganda,” reads one image of a young girl grasping a framed picture of Jesus on the cross. “I did this because all lives matter,” reads another post, next to a picture of Jesus carrying the cross, clearly poking at political tensions over police brutality.

Despite the large following on Army of Jesus, its sponsored posts fared far worse than sponsored posts for fake Russian pages directed at African Americans, gun owners, and other demographics, which drew in hundreds of thousands of users.

“My first thought on the Army of Jesus was that there’s no way anyone could take this seriously,” said Nate Smoyer, a Christian social media marketer. “But I’ve seen stuff like this before.

“When pages ask you ‘like to...’ or ‘share if you believe...,’ they are largely just trying to increase that page’s Edgerank [its placement in Facebook’s algorithm],” he said.

An Army of Jesus ad showing Jesus arm-wresting Satan and pledging to defeat Clinton was shown to just 71 people, 14 of whom clicked on it, according to a Tech Crunch chart based on the congressional testimony. 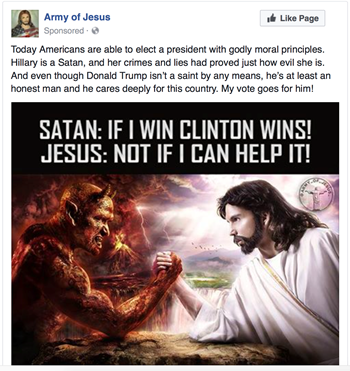 The October 2016 post urged voters to elect a president with “godly moral principles,” declaring that “Hillary is a Satan” and “Trump isn’t a saint by any means, he’s at least an honest man and he cares deeply for his country.”

It was specifically served to users whose Facebook profiles indicated they were interested in faith, the Bible, God, Jesus, or Christianity. It also targeted those who were fans of conservatives like Laura Ingraham, Ron Paul, Bill O’Reilly, Rush Limbaugh, Andrew Breitbart, Michael Savage, or Mike Huckabee.

Nick Runyon, a Christian social media strategist who serves as the executive director of CV–Christian Vision, attributed the low ad performance of the Russian posts to poor practice. The ads were poorly designed and used more text than Facebook recommends for its ad images, he said. Plus, the targeted groups—combining both Christian interests and political figures—were not narrow enough to be effective.

“The audience targeting for the Army of Jesus ad is a broad net with no real direction,” he told CT. “Facebook will let you run the ad, but you’ll pay more for it due to its lack of focus.”

While Facebook ad policies prohibit ads from asserting or implying a targeted group’s religion, race, or other “personal attributes,” sponsors can easily purchase ads targeted to appear to members of particular religious group by tracking their interests and likes.

Given the wide range of fake accounts, stirring up Clinton opponents and Trump opponents alike, some analysts speculate that the campaign’s overall goal was to spark dissension among Americans. In total, the Russian agency was found to be responsible for 80,000 posts and $100,000 advertising on Facebook, plus additional messaging through Instagram and Google ad words.

The unfolding details about the bogus social media posts have served as a wakeup call to the power of social media propaganda. In recent years, Christians—like many others online—have shared bogus stories and posts, as the fake news industry has grown more widespread and sophisticated.

“All fake stories harm the credibility to our witness,” said Smoyer. “I would advise all Christians to exercise patient and controlled discernment. I would advise you think before you click Like and Share.”

1. Click wisely. When a user engages an ad by clicking on it or liking it, the user is essentially agreeing to future exposure to that brand and its partners. Every ad is intentional. There is a reason—some reason—that you are being shown that ad.

2. Check your security preferences and ad settings regularly. Facebook users do have some control over what they see. Take control of who can find you and what ads you’ll see, by adjusting your settings appropriately.