Pew: Islam Is Most Official, But Christianity Is Most Favored Worldwide

How governments treat religion in 199 countries and territories.
Sarah Eekhoff Zylstra|October 3, 2017 09:09 AM 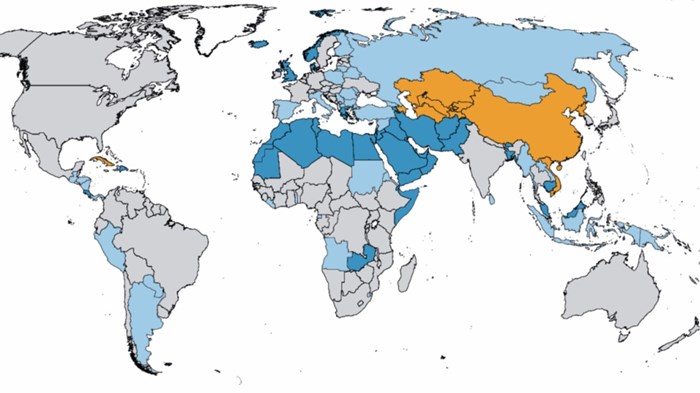 More than 40 percent of the world’s countries have an official or preferred state religion, according to a study released today by the Pew Research Center.

Pew surveyed 199 countries to ascertain which were publicly in favor of religion—and which religions they favored. Researchers weighed not only constitutions, laws, and policies, but also actions taken for or against religious groups.

The most popular official state religion is Islam, which is named in the constitutions or basic laws of 27 countries. That’s 63 percent of the 43 countries that officially designate a religion.

Many of those countries lie in the Middle East and North Africa. In fact, Lebanon is the only one in the region not to have an official or preferred religion.

“In some cases, state religions have roles that are largely ceremonial,” Pew researchers stated. “But often the distinction comes with tangible advantages in terms of legal or tax status, ownership of real estate or other property, and access to financial support from the state.”

Two countries have officially named Buddhism (Bhutan and Cambodia), and one Judaism (Israel), as their state religions.

Thirteen countries list Christianity as their state religion—nine in Europe (including the United Kingdom, Denmark, and Iceland), two in the Caribbean (Costa Rica and the Dominican Republic), one in Africa (Zambia), and one an island nation of 10,000 in the Pacific Ocean (Tuvalu).

But while Christianity isn’t often named in a country’s documents, it is favored by 28 of the 40 countries that show an obvious yet unofficial preference—“typically with legal, financial, or other kinds of practical benefits”—for one religion over another. Most of the countries that unofficially favor Christianity are in Europe and the Americas, such as Catholicism in Liechtenstein, Lutheranism in Denmark, and Anglicanism in the United Kingdom. Five more are in sub-Saharan Africa, and three in the Asia-Pacific region. 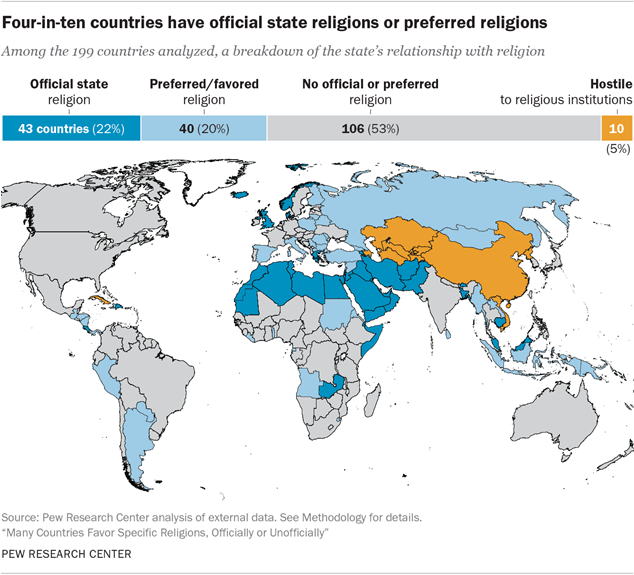 “Typically, the government describes these religions as ‘traditional’ or part of the country’s historic culture,” stated Pew researchers of the multiple religions category. “It may also provide these groups with legal or financial benefits, such as waiving the requirement to register as a religious group, providing funding or resources for religious education, or providing government subsidies.”

Just three countries favor Islam without naming it as their official religion: Sudan, Syria, and Turkey.

While 83 countries show a marked preference for one religion (or multiple religions), 106 profess to be neutral. That doesn’t mean they don’t take notice of religion. Many declare religious freedom for all. Some, like the United States, grant freedoms or favors like tax exemptions “evenhandedly … to many religious groups.”

“Broadly, the countries in this category can be said to maintain a clear separation of church and state,” Pew researchers explained. “But it is not necessarily the case that these countries avoid any promotion or restriction of religious practice.”

For example, France falls into this category but has banned face coverings in public.

Pew’s final category is the smallest—just 5 percent of the world’s nations—and contains those highly opposed to religion. They “exert a very high level of control over religious institutions in their countries or actively take a combative position toward religion in general,” researchers stated.

Those countries are almost all in Asia—Azerbaijan, China, Kazakhstan, Kyrgyzstan, North Korea, Tajikistan, Turkmenistan, Uzbekistan, and Vietnam—as well as Cuba. Some, especially those in the former USSR, now lean heavily Muslim, but keep such a close eye on mosques and imams that they’re actually hostile to religion, Pew researchers concluded.

Belonging to an official state religion is generally a boon for its followers. While the level of privilege ranges from nominal benefits to mandatory adherence, it usually comes with some sort of special preference combined with regulations or punishments for those who deviate.

The benefits nearly always include financial funding: 98 percent of countries with an official religion and 58 percent of those with a preferred religion hand over money or resources for education, property, or religious activities. 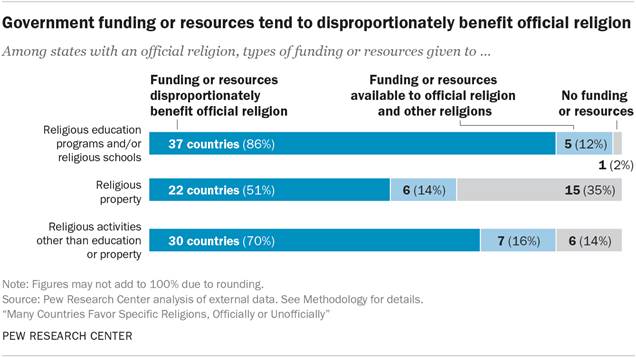 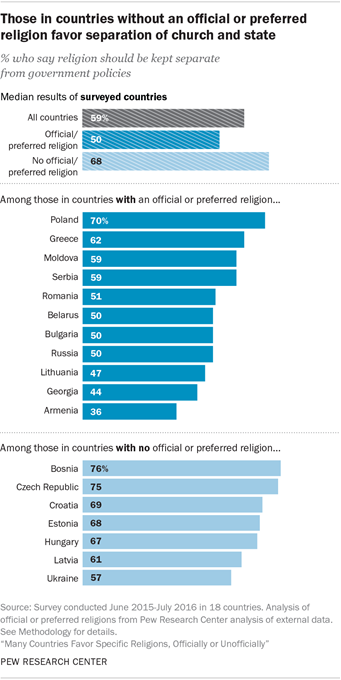 Perhaps not surprisingly, people who live in countries with an official or preferred religion are more likely to believe the government should be funding or promoting religion than those who live in a country without a national religion.

Pew surveyed 18 European countries—7 with no faith preference, and 11 with official or preferred faiths—and found that those without a national religion were less likely (median of 50%) than their counterparts (median of 68%) to believe government should stay out of religion and vice versa.

The one exception: Poland, which favors the Catholic church but also favors separation of church and state. Three-quarters of the people there say the church has an influence (75%) but that it shouldn’t have too much—or any—influence (65%).

People who have an official or preferred state religion are also more likely to believe that belonging to that religion is important to “truly belong to the nationality” (median of 66% vs. median of 43% in countries with no religious preference), though this varies drastically depending on if the person being questioned is a follower of that faith (81%) or not (31%).

Pew: Islam Is Most Official, But Christianity Is Most Favored Worldwide

Pew: Islam Is Most Official, But Christianity Is ...