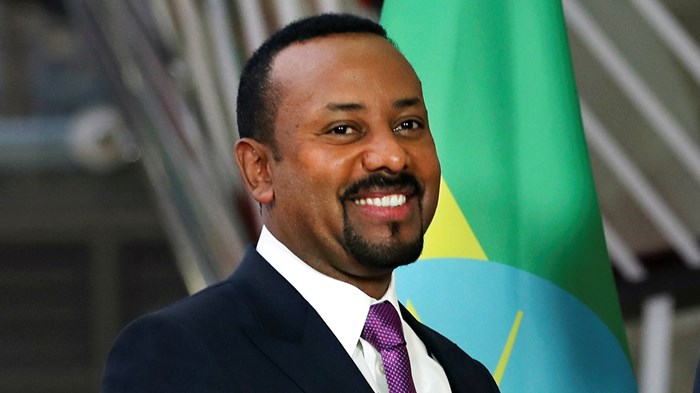 Ahmed signed a peace accord with President Isaias Afwerki of Eritrea last year, after decades of political stalemate and two years of violence that cost 80,000 lives along the border. The two countries have grown increasingly open to one another, with resumed air travel and telecommunications, the New York Times reported.

He spent his first 100 days as Prime Minister lifting the country’s state of emergency, granting amnesty to thousands of political prisoners, discontinuing media censorship, legalizing outlawed opposition groups, dismissing military and civilian leaders who were suspected of corruption, and significantly increasing the influence of women in Ethiopian political and community life. He has also pledged to strengthen democracy by holding free and fair elections.

As CT previously reported, Ahmed also helped reconcile two branches of the Ethiopian Orthodox Church, which split for political reasons in 1991. Orthodox represent the largest religious group in the country (around 40% of the population, compared to 19% Protestant and 34% Muslim).

He fostered reconciliation between Muslims and Christians in his hometown of Beshasha while a member of parliament and immediately began meeting with Abune Mathias, the Patriarch of the Ethiopian Orthodox Tewahedo Church as prime minister, offering his support to help end the schism. Negotiations had been cautiously ongoing for years, but perceptions of government opposition muted the effort, reported OPC News.

The son of a Muslim father and Orthodox mother, Ahmed is a Protestant Pentecostal, or “Pentay,” like many Ethiopian politicians.

His faith is seen as a driving factor in his push for peace. “There is something of the revivalist preacher in the way he evangelizes for his vision,” BBC News noted. “He has the energy, the passion, and the certainty.”

According to the Catholic Herald, Pentecostal beliefs correspond with the sense of hope and ambition in politics. “The beguiling feature of Pentecostalism is the idea that nothing is impossible,” said Andrew DeCort, director of the Institute for Christianity and the Common Good,

A member of the Full Gospel Believers' Church, Ahmed told followers after taking office, “We have a country that is endowed with great bounty and wealth, but is starving for love.”

After today’s announcement, the prime minister tweeted, “I am humbled by the decision of the Norwegian Nobel Committee. My deepest gratitude to all committed and working for peace. This award is for Ethiopia and the African continent. We shall prosper in peace!”

Ahmed is the 24th Nobel Peace Prize recipient from Africa; last year, the award went in part to Denis Mukwege, a Christian doctor dedicated to healing rape victims in the Democratic Republic of Congo (DRC).

With reporting by Jayson Casper.