Preemptive Love’s Jeremy Courtney says despite the Turkey deal, “This crisis shows no sign of letting up, and we can’t either.”
Jayson Casper|October 18, 2019 10:40 AM 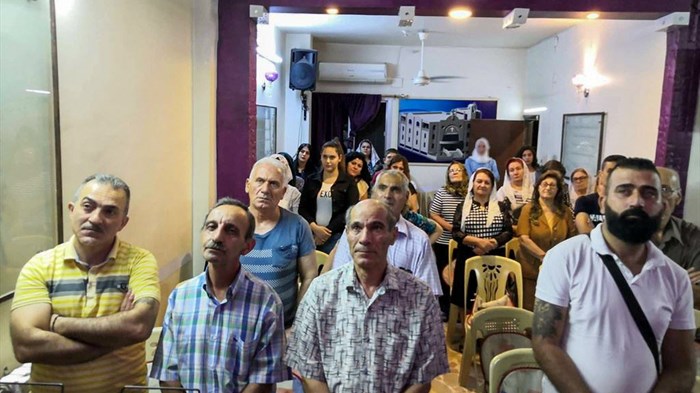 Though most of the fighting has stopped for now, Turkey’s incursion on Kurdish-controlled northern Syria has left another humanitarian crisis in its wake.

Local churches as well as Christian organizations like Open Doors and Preemptive Love Coalition have prioritized caring for the citizens who took the risk to stay behind and helping the displaced return.

Last Saturday night, after three days of Turkish bombing, the Alliance Church of Qamishli met to make a decision. Would they flee for safety, or remain and help?

To some degree they had no choice.

Fadi Habsouna, a father of two, was injured when missiles hit his home and ruined his shop. His wife is in critical condition. His grandfather’s home was destroyed by a bomb. The pastor housed them in church-owned property, and decided to remain to assist the family, and others suffering similarly.

The church agreed; only eight families would leave.

“These are extremely brave people who want to be salt and light in their communities,” said David Curry, CEO of Open Doors USA, who relayed this story from his field staff. “They want to maintain the presence of Jesus and reach out.”

Open Doors is better known for its advocacy work on behalf of the persecuted; Syria ranks no. 11 on its World Watch List of places hardest to be a Christian. Its local partners keep a low profile in order to provide on the ground assessment. But the crisis in Syria has driven them to humanitarian aid.

It is not the first time. Following the rise of ISIS in 2014, Open Doors helped 150,000 Christians located in camps along the Turkish and Lebanese borders. Now their community hubs are providing food, medical care, hygiene kits, and temporary shelter in the northeast Syrian towns affected by the Turkish incursion.

“Christians have to make hard choices,” Curry said. “Leave the communities they were raised in, move inland, or stay and hope they are not killed.”

Jacques Behnan Hindo, Catholic Archbishop of Hasakeh, said half of his diocese, totaling 5,000 families, have fled the area. He reports similar numbers in nearby Qamishli.

The United Nations Office for the Coordination of Humanitarian Affairs reported that 146 civilians have died so far. Over 160,000 have fled, including 70,000 children. The Kurdish-led local authority counted the total displaced at over 275,000. Of the 3 million people who lived in the northeast, 1.25 million were already receiving UN aid. Now the number in need has risen to 1.8 million, including 900,000 in acute need.

And worse, the Turkish military operation began during the winter planting season, and the region—Syria’s breadbasket—provides 90 percent of the nation’s cereal production.

The situation may get worse before it gets better, especially as most NGOs were forced by the violence to leave the area entirely. It is not yet clear how the deal struck between the US and Turkey will affect operations.

Under terms announced in a joint statement announced Thursday, Turkey will pause their offensive for five days, allowing Kurdish troops to withdraw. Turkey will then take control of a 20-mile deep safe zone running 280 miles along much of the border with Syria.

The UN expressed its cautious support, thankful for de-escalation, but admitting there is still a long way to go.

“We just cannot effectively operate with the heavy shelling, roads closing, and the various and constantly changing armed actors in the areas where we are working,” said Made Ferguson, deputy country director for Mercy Corps, which had been operating in the area since 2014.

Other major agencies, like Médecins Sans Frontières, have also had to relocate. The UN remains, but the World Health Organization has reported that two national hospitals, three field hospitals, and several health centers are either out of commission or offering limited services.

But some organizations are sticking it out.

“We’ve been able to continue, because we work with and through locals who know the area, know the needs, and know the security situation extremely well,” said Jeremy Courtney, founder of Preemptive Love, which has been active in Syria since 2016. “That said, this is very much a high-risk environment.”

And Courtney doesn’t expect the deal will make it any better—but rather worse.

“It is likely that families will continue to be displaced from the border zone as Turkish forces move in,” according to their official statement. “Those already displaced may have no home left to go back to, as a direct result of this deal.”

Preemptive Love had been focused on helping the displaced return. In the first half of 2019 they rebuilt 45 homes, helped launch 61 businesses, and created 500 farming jobs.

In response to the Turkish incursion, they opened two mobile clinics. But Courtney said a recent phone call providing updates was interrupted when the local partner had to pull bodies from the street.

“This crisis shows no sign of letting up, and we can’t either,” he said. “The Kurds of northern Syria already feel betrayed and abandoned. We cannot leave them to fend for themselves.”

Save the Children is also remaining, securing safe places to play in refugee camps, said Erin Taylor, senior director of communications. Basic services are provided, but they must wait until they can determine how and when to safely scale up delivery.

But following the deal, plans may change.

“There will be a huge impact on where we’re able to access in the northeast,” said Sonia Khush, the Syria response director at Save the Children. “We have to leave as the battle lines change.”

Even local churches are having difficulty.

Ibrahim Nseir, pastor of the Presbyterian Church of Aleppo and a board member of the Synod of Syria and Lebanon, said their three sister churches in the area are well-qualified to help, but have no funding.

“The churches are the means of God to take care of the needy and the marginalized,” he said. “They have carried the largest share of relief work.”

Until now, Christian communities have primarily relied on their own. Ashur Eskrya, president of the Assyrian Aid Society (AAS), said that roughly 700 Assyrian Christian families and 27 Armenian families fled the conflict zone, relocating to churches and family members in Hasakeh, Qamishli, and Damascus. Other Armenians went to Aleppo.

Based in Iraq, AAS was not prepared for this current crisis. Still, their access to funding is great, in regular conversation with USAID.

Without designating recipients, President Trump pledged $50 million for stabilization support and the protection of ethnic and religious minorities.

“The US condemns the persecution of Christians,” he said. “We pledge our support to Christian communities everywhere suffering under the burden of oppression and brutal violence.”

But Edward Clancy, director of outreach for Aid to the Church in Need USA (ACN), said his Catholic organization, working in Syria since 2011, is hindered from providing immediate support through their church networks.

He hears local Christians expressing hope that the merger of Kurdish-Arab militias and the Syrian army will calm the area and repel the Turks.

But some reports say international aid workers are leaving the region for that very reason. If Damascus is back in charge, their presence may be illegal.

ACN has been providing assistance in regime-held areas where the needs have been greater—until now. There are roughly 30–35 Christian villages in Kurdish-held areas, he said, but many are practically ghost towns. Stability must come first, and then those who remain can assess their needs.

“There is no military convoy to protect you,” Clancy said. “But if there is a call, we will respond.”

From Iraq, one already has. Bashar Warda, Chaldean Catholic Archbishop of Erbil in the autonomous region of Kurdistan, asked the church to prepare to receive another wave of refugees. He prayed the government would let them in.

But the wave did not come, because according to reports, it was the Kurdish militias who blocked the border. They did not want their numbers to diminish compared to the Arab population.

The UN says only about 1,000 Kurds have fled to Iraq. Ashty Bahro, vice president of the Evangelical Alliance of Kurdistan and head of Zallal Life, a Christian NGO, puts the number between 2,000 to 3,000. His multi-ethnic staff includes Kurds, Arabs, Muslims, and Yazidis. As a rule, they don’t ask how many refugees are Christian.

Zallal Life, founded in 2007, is providing food, mattresses, blankets, and supplies. And their unity as a staff provides a powerful witness. Many then ask for Bibles, or to go to church.

“We reveal Jesus through our actions,” said Bahro. “We love others, we are all one, and we want to show this.”

Though in full agreement, Steve Gumaer, founder and president of Partners Relief and Development, takes great care in this regard. Partners is a signatory to the Red Cross and Red Crescent Code of Conduct, which forbids aid from being used to further a particular political or religious standpoint.

“I can’t think of a worse time to ask people to change their religion than when they are facing a crisis,” he said. And when people ask, he tells them, “You matter, and how we treat you is the acid test of our faith.”

Partners first registered in Erbil in 2012, and began working in Syria in 2014. Having built strong partnerships with the Kurds, they are also one of the few organizations remaining in the northeast, with a focus on children.

Raqqa, the former capital of ISIS’ proclaimed caliphate, has been a center of their work. It is a third regional city to which Christians are fleeing. Partners rebuilt five area schools, returning 1417 children to an education.

Prior to the Turkish attack, an American child psychologist was due to arrive in 2020. While plans and permits may depend on ongoing stability, Gumaer is astounded by the overall resilience of those they serve.

“The Christians accept this is the life they have to live,” he said. “They don’t blame God the way I might if it happened to me.

“They have a hold on God’s goodness, and they still worship him.”

But the best service foreign and Christian aid can offer, said Preemptive Love’s Courtney, is simply to show up.

“There are 160,000 people without a home today because of decisions made a week ago,” he said. “I’m not interested in counseling others on how to make sense of their suffering, when I can do something to help prevent it.”