Christian leaders weigh when and how to engage in the city’s mounting clash over racial justice.
Andrew Shaughnessy in Portland|August 12, 2020 09:00 AM 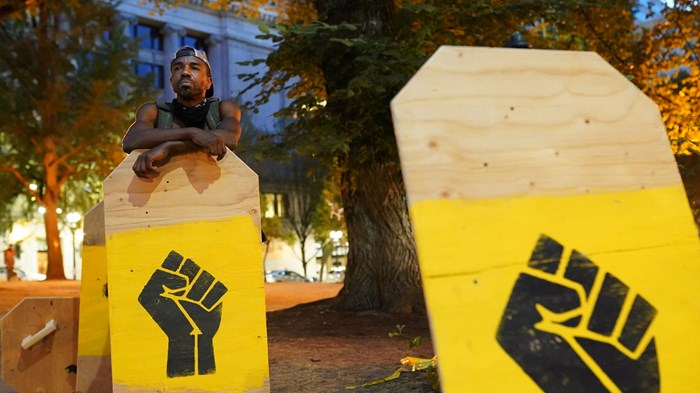 From rural towns to major metros, protests for black lives have swept the country in the wake of George Floyd’s horrific death at the hands of Minneapolis police. But none sustained the way they have in Portland, Oregon, which on Tuesday reached its 75th consecutive night of protests.

Even in a city known for its activist spirit and progressive politics, the recent protests over racial justice and policing represent unique circumstances.

Last month, after federal agents surrounded Portland’s downtown justice center, nightly protests intensified. As the hours grew later each evening, the front lines of the crowd pressed forward with walls of umbrellas and homemade shields, while the feds fired pepper balls and deployed teargas and rubber bullets to disperse protestors.

Every morning, the headlines chronicled the tit-for-tat violence, with national news featuring glimpses of the scene: speeches by Black Lives Matter activists, the festival-like atmosphere of volunteers handing out “Riot Ribs” and making art, and the “Wall of Moms” linked arm in arm to take the first round of teargas.

As the marches continue, local Christian leaders have weighed how or whether to get involved. Many care deeply about standing for black lives, yet the protests are complex and the goals and tactics of the participants vary widely.

The violence—stoked by a few—is real, but so is the dancing, music, kindness, and courage. Add in the concerns of some about the ideology of groups like Black Lives Matter and the moral ambiguity of joining a crowd of thousands to protest in the middle of a global pandemic, and many find themselves caught in a conundrum: How ought Christians fight for justice for the marginalized and oppressed in this complicated moment?

Even as the news turned to the controversial revival led by Bethel musician-turned-politician Sean Feucht last weekend, Portland Christians are still grappling with how they will answer the biblical directive to “do justice” on behalf of the city they call home.

Eric Knox, an African American pastor, has attended protests across the city since June, joining some of the kids he mentors through his nonprofit, HOLLA.

“I decided to go out there about a month ago to support them and see it for myself, and I was quite impressed,” said Knox. “I’m trying to fan that flame in them to take back their narrative and fight for something that they and we really care about: leveling the playing field, dealing with systemic oppression, and dealing with the police brutality that impacts our community.”

Though the vast majority of Portland protestors are peaceful, Knox acknowledges that a violent minority is present—the sort that throw rocks and firecrackers at federal agents or scrawl “Die Pigs” in graffiti on the side of the courthouse. Yet to him, the need to stand against injustice trumps the actions of a few extremists.

“There’s always fringe groups in any kind of movement,” said Knox, who began his social justice work in Portland in the ‘90s with an organization called Urban Progress. “It’s striking to me that white evangelicals are saying: ‘Don’t label all police officers as bad when there’s just a few bad apples out there.’ And yet they will turn around and label the whole protests based on [the actions of] a few looters and rioters.”

The way Knox sees it, a gospel-driven response to protests like these requires American Christians to learn to embrace nuance and live in complexity—following Jesus in movements that stand with the oppressed and marginalized, even when those movements are messy.

“I’ve been in the crowd right by the federal building and saw [other demonstrators] throw firecrackers. I’ve even seen them burn Bibles there. … And to be honest with you, I understood. If I looked at the kind of Christianity today that’s sutured to white supremacy and power and empire, and that was the best representation that [I as] a minority could experience, I’d burn a Bible too,” he added.

“But to counter that narrative, I’d much rather be a Jesus follower out there saying: ‘Christianity is way more subversive than you think.’ … The kingdom of God always starts on the margins, with the poor, the maligned, the oppressed. That’s where [it] breaks in.”

In Portland, where the African American population is less than half the national average (6% compared to 13%), white Christians have joined protests and demonstrations led by black activists. Orange-clad dads carry leaf-blowers to push back tear gas. Kindergarten teachers wear bike helmets to guard against rubber bullets. They hold homemade signs.

Ashley Perlberg’s read, “Let’s not forget the narrative: BLACK LIVES MATTER.” Last month, she was going to three or more protests a week, joining the Wall of Moms wearing yellow. The Christian mom of three acknowledged that while as a white woman, she can’t understand everything her Black neighbors in Portland are going through, she can show up to support them and do her part to change the narrative.

“I’m out here to be an example [to my kids]; to show them that if you’re going to love and follow Jesus like we say we do in my family, then this is what that means,” said Perlberg. “I’m trying to teach them what it looks like to stand up.” 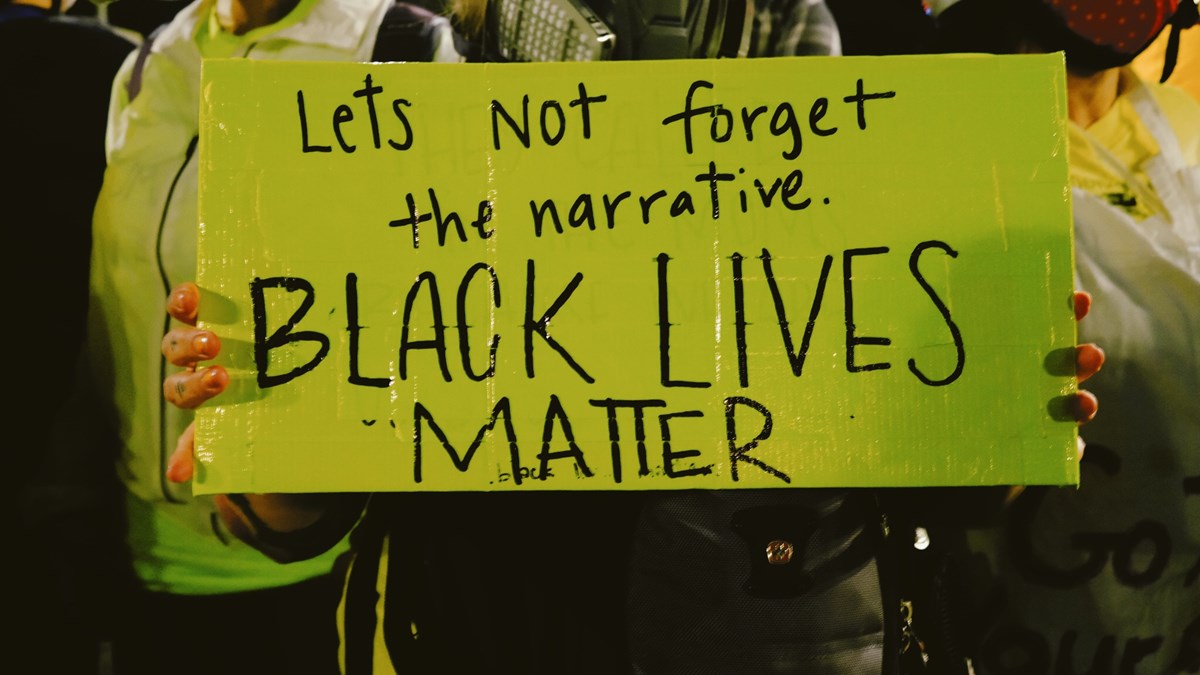 Fellow Christian may share the same desire to fight against the injustice in their community, but take a different approach. Keith Jenkins, an African American pastor at East Hill Church in Gresham, Oregon—just outside of Portland—has not participated in or attended the recent protests. But he hasn’t been silent either.

“The whole idea of a protest is to bring light to an issue, in this case injustice and inequality with the African American experience in America,” said Jenkins. “I had to make a choice whether to be on the front end, where the protest was happening, or on the back end, where policies and systemic change was happening.”

Just as Jenkins was mulling over what to do, the mayor of Gresham invited him to join him and other community leaders for conversations with city hall and the police bureau.

“With those invitations, I was actually already inside, able to navigate what we really want to do, which is dismantle systems that continue to oppress people and lock them out,” Jenkins said. “I was already where I wanted to be.”

A few weeks back, Jenkins organized a “non-political” prayer walk through downtown Portland with several area churches. With tear gas still lingering in the morning air, Christians laid hands on the Justice Center and Courthouse, they prayed for police officers and protestors, they cried out to God for peace and healing for their city.

Standing there, looking at the aftermath of another night’s protest, he was not happy with what he saw. He cared so deeply for the cause, but how did any of this move things forward?

“The biggest thing that I hear from people [in the church] is that they don’t like Black Lives Matter as an organization,” he said. “Neither do I. My faith and that organization do not line up. Not to mention that I’m a 10-year veteran in the United States Marine Corps … so I didn’t like Colin Kaepernick’s protest with the flag, because I’ve had friends come back in coffins draped in that flag. But at the same time, although I did not like the form of his protest, I was in solidarity with the substance of it. Likewise with Black Lives Matter.”

Again, the complexity—Jenkins figures that the vast majority of people now saying “Black lives matter” are not affirming an organization, but rather the value of black bodies. Yet, he worries that even that narrative has become convoluted in the protests, intermingled with the agenda of Antifa or with that of Portlanders more concerned with federal overreach than racial justice.

“All of that is true, and yet it still shouldn’t stop the church from pursuing justice, loving their neighbor. That doesn’t change,” Jenkins said. “Listen, the world has always been messy. … When you start thinking of the civil rights movement, you’ve got to think through all of the different organizations [that participated], the Black Panthers, the Nation of Islam, Martin Luther King’s camp.”

“Everybody had a different philosophy, ideology, and a different part to play in this bigger narrative. And so, I have to be careful about being overly critical about things that I think aren’t helpful,” he said. “I just want to be an advocate for the gospel, for equality for image bearers.”

Some Christians, deterred by the violence, have avoided the downtown protests and organized peaceful, family-friendly marches and rallies in their neighborhoods instead.

Others, skeptical of the lack of a unified message or the protests’ ability to create tangible change, have remained silent for now. Some focus on self-examination and education, starting books clubs on biblical justice and studying America’s bloody history of racialized violence. Christian critics question the movement altogether, considering the protestors rabble-rousers, Marxists, or anarchist agitators.

Even as the protests begin to die down, America is still at an inflection point, and Portland’s experience may just be a microcosm of a national conversation that has only just begun.

We humans like our stories simple and clean, but the world is rarely like that. Portland’s protests certainly aren’t, nor is the larger movement. And for Christians seeking to love their neighbor well, there are no easy answers.

Christians across traditions can agree that God’s Word is clear: We are called to “do justice, love mercy, and walk humbly with our God.” We are to imitate Jesus by standing with the marginalized and oppressed.

Yet, what that looks like in a city whose streets linger with teargas night after night, whose protestors offer conflicting goals or messages for their demonstrations, is far less clear. It can be inspiring and infuriating and terrifying at the same time, and like Knox said, to faithfully engage, the church must learn to grapple with nuance.