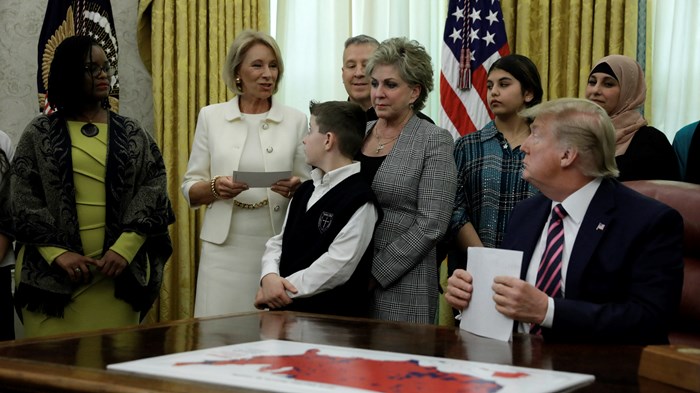 This is first updated guidance on school prayer from the Education Department since 2003. The directive orders states to verify that school districts have no policies limiting constitutionally protected prayer and to refer violators to the Education Department. That’s much like the earlier guidance, but the directive goes further in requiring states to provide ways for making complaints against schools.

Students can pray on their own or together during lunch or other free times, for example, and student speakers can pray at assemblies or sports games as long as they weren’t chosen to speak based on their religious perspectives, according to the guidance.

The president hosted more than a dozen students and teachers in the Oval Office for the announcement, including Teachers Who Pray founder Marilyn Rhames, who CT featured in 2018. Her organization gathers teachers for prayer and spiritual formation outside of classroom instruction time.

“There’s a myth out there that what Teachers Who Pray does … is not legal, and it absolutely is,” she said during the presidential gathering. “I’m here to tell teachers we need to pray … We need to do what we have to do for our kids because if we’re not strong, we can’t make them strong.”

Public schools have been barred from leading students in classroom prayer since 1962, when the Supreme Court said it violated a First Amendment clause forbidding the establishment of a government religion. Later decisions extended the ban to school graduation ceremonies and, under certain circumstances, school athletic games.

Yet Americans remain largely in favor of prayer in public schools. According to General Social Survey data analyzed by political scientist Ryan Burge, just 20–35 percent of Christians support a ban against requiring reading the Lord’s Prayer or the Bible in public schools, and the religiously unaffiliated are evenly divided on the question.

Civil liberties groups say the firewall protects religious minorities and ensures fair treatment of all faiths. But many Christians say courts and schools have pushed too far against the right to free religious expression.

“The White House isn’t saying whether one should pray or to whom or what they should pray to, they are simply making it clear that in the United States students have First Amendment rights,” said Johnnie Moore, an evangelical consultant and one of Trump’s faith advisers, by email. Moore recalled a dispute over a Bible study he held over lunch when he was in high school. “It was totally absurd.”

Today, a majority of teens in general (82%) and evangelical teens (64%) say there are no religious support or prayer groups that meet in their school, Pew found.

Additionally, under orders from Trump, nine Cabinet departments on Thursday proposed rules intended to remove “regulatory burdens” on religious organizations participating in federal programs by eliminating a requirement that they refer people to alternative providers upon request.

Much of the new proposals follow through on an executive order Trump from 2018 that aims to put religious groups on equal footing when competing for federal grants and other funding.