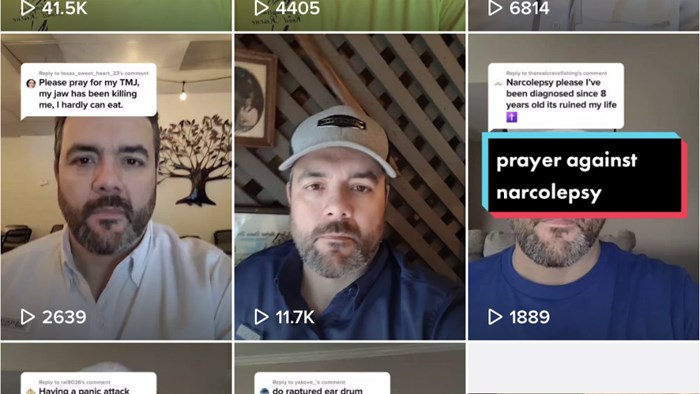 Michael Paul Corder says he “cut his teeth” praying in public by going around to grocery stores and striking up conversations, asking folks if they wanted to pray. But even in the Bible Belt of East Tennessee, he found people were often hesitant or embarrassed.

Not so, he said, on TikTok.

Corder does a livestream open prayer every day, in which he prays for the hundreds of people who hop into the virtual chatroom without embarrassment. Many of his nearly 165,000 followers who join express feeling relief or calm when he prays for them. Their pain or healing is not something that can be verified, Corder admits, but still, he believes their presence testifies to something missing from their churches.

“At those churches, they’re not praying for the sick, or if they are, they’re not seeing results. At mainstream churches, you get more of a philosophical lecture,” Corder told Religion News Service.

Sometimes on his livestreams, Corder will pray in tongues—a practice popular among charismatic and Pentecostal Christians who say the unknown language is a gift from the Holy Spirit, as described in Acts 2.

“I think words are not the greatest at describing the sensation,” Corder said. “It’s being filled, it’s being baptized.”

“It’s a little mysterious,” he added, saying he speaks in tongues when the Holy Spirit moves him.

Pentecostal or charismatic TikTok is a thriving community of diverse Christians. It’s multilingual and multicultural and spans generations. Its hashtags have millions of views. Here, Christians who identify as charismatic, nondenominational, Assemblies of God, or Pentecostal all gather to share encouragement and witness for their on the internet.

Many of the videos on charismatic TikTok are dedicated to prayer—talking about prayer, encouraging others in prayer or praying on camera. In the charismatic tradition, this can often include praying in tongues, also known as glossolalia, and the hashtag for speaking in tongues has more than 4 million views.

Heidi Campbell, author of the recent book Digital Creatives and the Rethinking of Religious Authority, says new media has long been a ripe platform for evangelization and religious discussion—from the printing press to TikTok.

In nearly 30 years of research on faith practices in the digital world, Campbell believes that Pentecostal theology provides a warrant for enthusiastic embrace of new technology.

But not all believers on charismatic TikTok agree.

Taylor Cuthbertson, 27, has 27,000 followers on TikTok who watch her videos about living as a Pentecostal Christian. For Cuthbertson, there are some things that “are a big no on TikTok” and one of them is praying.

Michael Grattan, pastor of Manhattan Pentecostal Church, believes prayer belongs in public, but he’s not sure it belongs on TikTok.

Grattan explains the tradition of speaking in tongues as a sign of God’s spirit dwelling with baptized believers. The apostles were able to speak in many languages, to be understood as they addressed a crowd of people from different nations gathered in Jerusalem.

In a monolingual community, Grattan said, that sort of diversity of language becomes unnecessary, so the often unintelligible prayer language of “speaking in tongues” becomes a way of “expressing the deepest parts of your spirit,” Grattan said.

It’s perfectly appropriate for a public setting, Grattan said. But he cited Paul’s first letter to the Corinthians, which reads, “Let everything be done decently and in order.” On the internet, Grattan sees disorderliness and chaos.

Grattan does have an account on TikTok. “It’s a good way to get the pulse of the people,” he said. But he doesn’t post on it. He’s not sure it’s the ripest ground for prayer or evangelization, saying he thinks the internet’s constant stimulation drowns out the message of the gospel.

“When you have so many choices, it’s hard to see the real value and it’s hard to communicate value,” he said, “The vistas of knowledge available on the internet are unimaginable. But the flip side of that is that meaning is lost in the midst of it.”

“TikTok to me is the ultimate noise,” Grattan said.

Montana Cooley sees her mission on TikTok as breaking through the noise. “I want to spread the love of God,” she said.

At the end of 2020, Cooley, 19, said she was in a dark place. And then she started getting more involved again at the Assemblies of God church at which her great-grandfather was a preacher.

She wouldn’t show video of herself praying in tongues, however. First, she said, because it’s not premeditated but rather prompted by the Holy Spirit. “Sometimes I’ll do it out in public when the spirit comes my way,” Cooley said. But mostly because it usually happens in church.

Cooley does however talk about her experiences praying in the spirit to her 15,000 followers because she wants them to know that talking in tongues is a part of the Christian life.

“Some people think that talking in tongues is demonic,” she said, “but it’s evidence, showing other people that the Holy Spirit is there in your presence.”