Answers in Genesis plans a three-year expansion at its Ark Encounter site in Kentucky.
Associated Press|July 11, 2021 06:30 AM 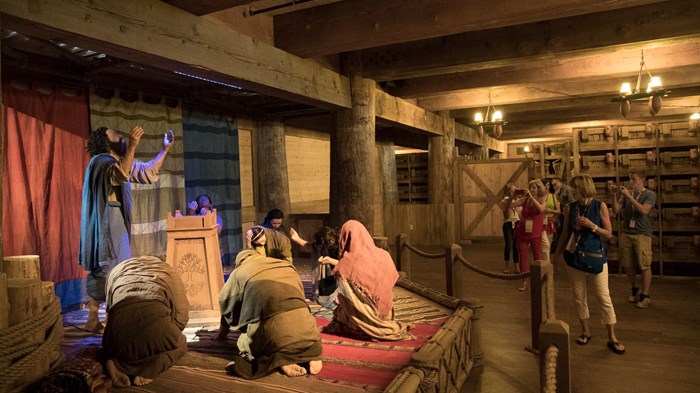 The Ark Encounter, a Bible-themed attraction in Kentucky that features a 510-foot-long wooden Noah’s ark, is planning to begin fundraising for an expansion.

The Ark Encounter said Wednesday that it would take about three years to research, plan and build a “Tower of Babel” attraction on the park’s grounds in northern Kentucky.

A release from the Ark Encounter said the new attraction will “tackle the racism issue” by helping visitors “understand how genetics research and the Bible confirm the origin of all people groups around the world.”

No other details were given on the Babel attraction or what it might look like. “I can assure you: it will be a fascinating, eye-opening attraction,” said Ken Ham, CEO of Answers in Genesis.

The Tower of Babel has been on the list of planned expansions since the park opened. Answers in Genesis, the ministry behind the ark and the Creation Museum, raised private funds to construct and open the massive wooden attraction in 2016.

Unlike Noah’s giant vessel, there is no biblical template or physical description for the dimensions of the Tower of Babel from Genesis 11, but according to Answers in Genesis, “Studying the oldest buildings from the area, archaeologists assume the Tower at Babel looked like a ziggurat.”

In the biblical account, people unite to build a brick tower as high as the heavens to “make a name for ourselves” (11:4). The Lord responds by confusing their language and scattering the people across the world. Prior to this, the Bible says, everyone on earth had been “of one language and of one speech” (Gen. 11:1).

A depiction at the Creation Museum shows a squat, unfinished structure since God interrupted plans to build it.

The Ark Encounter’s expansion plans also include an indoor model of “what Jerusalem may have looked like in the time of Christ.”

The Ark Encounter said attendance is picking up after the pandemic lull in 2020, with up to 7,000 visitors on Saturdays, according to the news release.